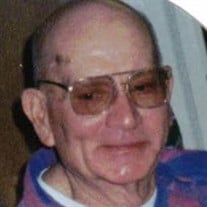 Jim Gauger Jimmie Allen Gauger was born August 2, 1937, in Stratton, Nebraska, to Ben and Virginia (Egle) Gauger. As a youngster he attended rural school and assisted his family on the farm. Jim was inducted into the U.S. Army in August 1961 and was honorable discharged in June of 1963. He returned to Southwest Nebraska after his discharge and engaged in farming. On December 19, 1968, Jim married Marlies S.(Haarberg) Woods in a ceremony at Colorado Springs, Colorado. The couple settled in Wauneta and then made their home in Dundy County moving in 1972. In 2002 they returned to Wauneta and his present home on the west side of town. Jim spent most of his life in Dundy County, Nebraska, doing what he loved “Being A Farmer.” He was an accomplished carpenter and mechanic spending many hours woodworking and building fantastic RCA airplanes. Jim enjoyed fishing, hunting, and RCA flying as well. Living on the farm found many friends stopping by to fly RCA planes and enjoying a cup of coffee as well as homemade cookies made by Marlies Jim loved his farm but he also loved flying. He was a spray pilot for many years and was around airplanes all of his life. Jim was a talented and self-made man. Jim passed away at his home in Wauneta on Wednesday, November 6, 2019. He was 82 years of age. Survivors Include: Sisters: Twilla Denker of Wauneta, NE Dorothy Gauger of Wauneta, NE Niece: Lisa Krajewski and husband, Steve, of Ogallala, NE Nephews: Lee Denker and wife, Karen, of Wauneta, NE Scott Denker, of Wichita, KS Uncle: Dwight Egle of Imperial, NE Sister-In-Law: Dorinda Polly and husband, Kenny, of McCook, NE Special Friends: Mark, Karen, Ross and Carson Fanning of Imperial, NE Jim was preceded in death by his parents, wife, Marlies, and brother-in-Law; Louie Denker. Graveside services with full military honors will be held Monday morning, November 11, 2019, 10:30 A.M. (Mountain Time) at the Eden Missionary Cemetery, rural Wauneta, Nebraska, with Rev. Lloyd Bley officiating. In Lieu of flowers, memorials have been suggested to the Wauneta EMT Unit or the Wauneta Volunteer Fire Department. On line condolences may be left at liewerfuneralhome.com LIEWER FUNERAL HOME OF WAUNETA ENTRUSTED WITH ARRANGEMENTS

Jim Gauger Jimmie Allen Gauger was born August 2, 1937, in Stratton, Nebraska, to Ben and Virginia (Egle) Gauger. As a youngster he attended rural school and assisted his family on the farm. Jim was inducted into the U.S. Army in August 1961... View Obituary & Service Information

The family of Jim Gauger created this Life Tributes page to make it easy to share your memories.