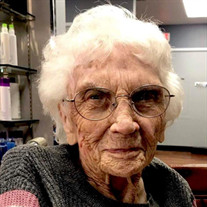 Jessie Annabel (Brown) Pump entered this world at the family farm North of Wauneta, Nebraska. The 4th child of 8, Annabel was born on January 18, 1920 to her proud parents, Gertrude Orvetta (Witt) and Andrew Jackson Brown. Annabel remembers riding on the family horse, Chloe, with three of her siblings to and from the Garfield School where she attended grades Kindergarten through 8th grade. The family then moved to Hamlet, Nebraska where Annabel attended High School in Wauneta. Annabel, her brother, Ray and a couple cousins rented from a family in Wauneta as traveling back and forth every day just wasn’t practical in those days. During her High School years and later, Annabel was often called upon to sit with her Aunt’s children while another was being born! Annabel graduated from Wauneta High School in 1938. After graduation, she followed in her mother, Gertie and older sister, Margaret’s footsteps and began teaching at the Garfield school. She taught all twelve grades and enjoyed watching her students grow and learn. On August 23, 1942, Annabel was joined in holy matrimony to Lessly William Pump at the Elmer Church in Elmer, Nebraska and pledged to spend their life together. From this union, four children were born, Jackie Lee, Linda Diann, Edith Jane and Sharon Jean. This family of six made their home on the Pump homestead South of Venango, Nebraska. Annabel enjoyed her life on the Pump family farm; raising her children and working in her garden (of mostly tomatoes), crops and animals. She enjoyed her photos, crocheting and her stories on TV. Even her grandchildren new they had to be quiet when “All Grammie’s Children” came on! Grammie, as most of her grandchildren, great-grandchildren, great-great grandchildren and many small children knew her, LOVED to sing. Her favorite lullaby was “I love you a bushel and a peck, a bushel and a peck and a hug around the neck.” Many times after visiting Grammie, the children would come home singing that song. She was also a lucky person who usually found pennies on the sidewalk when she was shopping. She would always say they came from heaven for luck. She worked for a time at Adams Drug Store in Imperial where you could always tell when she was working as her whistling filled the air when you walked in. She was active in the Neighborhood Club, fixing and serving food for the farm sales and enjoying the monthly meetings where many important subjects were discussed. Very few times when her children were playing sports at Venango Grade and High School would the seats be empty at the top of the bleachers at center court. They were also big supporters of their children’s many Bake Sales, Chili Feeds and Band Days in Lincoln and Boulder. Heaven gained a beautiful, spiritual soul when Annabel joined Heaven’s angels on Thursday, December 3, 2020 at Mesa, Arizona at the age of 100 years 10 months 15 days. Annabel will join her husband, Lessly Pump, son, Jackie Pump, daughter-in-law, Mary Pump and son-in-law, Gary Jones as well as her parents, Andrew “Jack” and Gertie Brown, all seven of her siblings, six of their spouses as well as all eight of her brother and sister-in laws and their spouses and a multitude of nieces, nephews, aunts, uncles and cousins as they have left this earth before her. Annabel is leaving behind her daughters, Linda (Alan) Churda, Edith Jones and Sharon Daigger; 10 (+9 spouses) grandchildren, 35 (+6 spouses) great-grandchildren and 14 great-great grandchildren. As well as her many nieces, nephews and friends who will also miss her generous spirit. Visitation will be held Monday afternoon, April 19, 2021, 2:00 P.M. -6:00 P.M. at Liewer Funeral Home in Imperial, NE Funeral Services will be held on Tuesday morning, April 20, 2021 at 10:30 A.M. at the Westside Church of Christ, Imperial, Nebraska, with Mr. Wesley Wynne and Mr. Randy Hayes officiating. Interment will follow at Mount Hope Cemetery, Imperial, Nebraska. In lieu of flowers, contributions can be made in Annabel’s name to Savior Hospice and Palliative Care, located at 4530 E. Shea Blvd, Suite 160, Phoenix, AZ 85028-6042. Online condolences maybe left at Liewer Funeral Home.Com LIEWER FUNERAL HOME ENTRUSTED WITH ARRANGEMENTS   The Legacy of Lessly & Annabel Pump Jackie/Mary Paula/Terry – Alan, Jack; Alex, Ella; Cody/Brittani, Dakota, Aayliah, Peyton, Raiden; Zachari/Brittany, Kaiden, Brysen Sarah/Bryan – Lucas; Daniel Bill/Kristen – Lessly; Brenden; Nathan Linda/Alan Christel/Brian – Jackson; Mariha; Marissa; Tyler; Kaitlynn; Christina; Chloe Amber – Derick Edith/Gary Kimberly/Pete – Cheyenne/Nicholas, Payton, Alexis, Aurora; DeeDee/Steven, Robert Daniel, Jr.; Amanda/Dalton, Sr., Dalton, Jr., Bentley; Belinda/Samantha Brad/Trista – Ryssa, Kylie, Robin Sharon Jessica/David – Ryan, Emily, Amber, Alexis Brandon/Jessica – Kaleb, Naythen, Rayden, JillyAnn, Fynn Drew/Hannah – Paige, Tatum To our Mother Our Father in Heaven whose love is Divine, Thanks for the love of a Mother like ours… And in thy great mercy look down from above, And grant this Mother the gift of your love. An all through the year, whatever betide her, Assure her each day that you are beside her… And Father in Heaven show us the way To lighten her tasks and brighten her day And bless her dear heart with the insight to see That her love means more than the world to us.

The family of Jessie (Annabel) Pump created this Life Tributes page to make it easy to share your memories.

Jessie Annabel (Brown) Pump entered this world at the family...