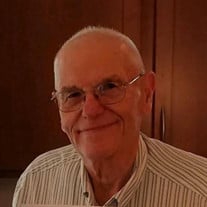 Ernest Bernard, Jr., 86, of Imperial, died September 23rd, 2020, in North Platte, NE. He was born in Haxtun, Colorado, to Nettie (Starling) Bernard and Jess Bernard Sr. on August 7, 1934. The family then moved to the farm south of Imperial, where he lived and worked the rest of his life. Jess graduated from Chase County High School in 1952. He was one of the early FFA State Farmers of Nebraska to be from Imperial. He played football for 4 years, persisting on the team even though the football field was covered in stickers. On August 10th, 1952, he married Joyce Dart. After their marriage, they resided at the farm. They had one child, Janet. Jess served as a Chase County Commissioner for 16 years and served on the Rural Fire Board for over 25 years. He and Joyce were honored as the Chase County Conservation Honor Family in 1982. Jess was an early adopter of irrigation, and took pride in keeping current with new farming and conservation methods. As young farmers, he and Don Grosbach spent a lot of time discussing new farming methods and planning next year’s crops. Jess loved to spend time with his grandkids, giving tractor rides, teaching to mow and drive and sledding and skating in the winter. He enjoyed helping kids with their homework and fixing bikes and airing up the bike tires of the entire neighborhood. Jess and Joyce loved decorating for Halloween and Christmas each year, and definitely looked forward to lots of trick-or-treaters. Jess built remote control model airplanes, and eventually modified the plans to improve the function of the planes. He spent many, many Sundays at Vilas Smith’s place flying the planes. Jess also loved sailing on Enders Lake in their Sunfish sailboat. He specialized in cooking breakfast for friends and family at Oltman’s Grove. Jess and Joyce enjoyed many evenings playing cards well into the night with Bernard and Sandy Nelson. They also got to go on lots of vacations with their dear friends, Lucille and Burdette Bauerle and Richard and Jeanie Johnson; traveling to Alaska, Hawaii, Glacier National Park, Niagara Falls, Mackinac Island and Branson. He and Richard also attended many Husker football games. As he slowed down at the farm, Jess valued the friendship, help and advice of Terry Bilka and Dan Reeves. He was exceptionally kind and generous to friends and strangers alike. Jess was preceded in death by his parents Jess and Nettie Bernard; his in-laws Bus and Alta Dart; and brothers-in-law Jerry and Keith Dart. He is survived by his wife Joyce; daughter Janet Evans and husband Rob; honorary son and daughter Jayden and Ashli Maris; and his grandchildren: David and Sarah Bernard-Stevens, Matt and Shayda Bernard-Stevens and daughter Armina, and Kobe, Braxtyn, Gavyn and Anna Maris. Memorials are designated to the Chase County FFA. An outdoor celebration of life reception will be held Sunday afternoon, September 27, 2020, 1:00 P. M.- 4:00 P.M. (Mountain Time) at 1243 Wellington Street, Imperial, NE. On line condolences may be left at liewerfuneralhome.com LIEWER FUNERAL HOME ENTRUSTED WITH ARRANGEMENTS

Ernest Bernard, Jr., 86, of Imperial, died September 23rd, 2020, in North Platte, NE. He was born in Haxtun, Colorado, to Nettie (Starling) Bernard and Jess Bernard Sr. on August 7, 1934. The family then moved to the farm south of Imperial,... View Obituary & Service Information

The family of Jess Bernard created this Life Tributes page to make it easy to share your memories.