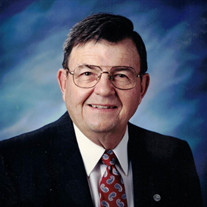 Jerald “Jerry” J. Owens was born on August 2, 1934 in Benkelman, Nebraska to Joseph G. and Erma V. (Call) Owens. He attended school in Benkelman, graduating with the Benkelman High School Class of 1953. After high school, Jerry continued his education at Regis University in Denver, Colorado for one year until he was drafted in the United States Army. Jerry joined the United States Army on July 14, 1955 at Fort Carson, Colorado. He went to Southeastern Signal School in Fort Gordon, Georgia and qualified in the Field Radio Repair Course graduating in April 1956. He then went to Korea as a specialty technician and received the Korea Defense Service Medal and the Army Good Conduct Medal. He was transferred to the reserve component of the Army on July 3, 1957 and was honorably discharged on June 30, 1963. Jerry was united in marriage to Rose Ann Lorens on August 20, 1957 at St. Joseph’s Catholic Church in Stratton, Nebraska. Jerry and Rose Ann settled in Benkelman where Jerry had an early start as an entrepreneur and salesman. He and his father Joe Owens started a business selling Ford tractors and corn pickers. A few years after that they started selling push mowers with motors on them. They entered into the Hesston and New Holland businesses in the 60’s and 70’s. After Joe retired in 1968, Jerry and his brother John formed a corporation and added the General Motors Chevrolet dealership and the True Value Hardware store. Jerry and John took over operations for their father Joe’s farm in Benkelman in 1971. Jerry retired from the automobile, farm, and hardware business in January 1997 and retired to McCook, Nebraska at the request of his beloved wife Rose Ann. He obtained his Nebraska real estate license shortly after their move to McCook and sold real estate in Southwest Nebraska until he retired (again) in 2005. During his retirement, Jerry and Rose Ann traveled to Casa Grande, AZ to spend the winter months. They made many dear friends in the twelve years they were snowbirds. Jerry was an active member of the Knights of Columbus where he was a Fourth Degree Knight. He belonged to the Benkelman Council 10163 and served for four years as District 30 Deputy. He also held the position of Faithful Navigator for two years at Assembly 600 Angelo Guiseppe Roncalli and at the state level for four years as the publicity chairman. Jerry was also part of the Early Day Gas Engine Tractor Association, Inc. Branch #238 and took to restoring old tractors and hit-and-miss engines. He really enjoyed going to tractor shows and spending time at his Stratton farm to work on his latest engine. He was also a member of the Benkelman School Board where he worked to consolidate all the country schools and establish a hot lunch program. Jerry was also a member of the Benkelman Cemetery Board. Jerry’s other hobbies included woodworking, overseeing the farm operations, having daily meetings with his coffee club buddies, and befriending and talking to anyone who would listen. Jerry passed away Monday morning, January 13, 2020 at the Community Hospital in McCook. He was 85 years of age. He was preceded in death by his parents, Joseph G. Owens and Erma V. (Call) Owens; granddaughter, Sarah E. Owens and sister-in-law, Aliska Owens. Survivors include his wife of 62 years, Rose Ann Owens of McCook; children: Shelly Owens of Centennial, Colorado; Greg (Lori) Owens of Imperial Nebraska, and Diana (Rob) Collins of Centennial, Colorado; grandchildren: Emily (Eric) Lakey, Nathan Owens, Josie Collins, and Finian Collins; brothers: Robert (Elaine) Owens of St. Francis, Kansas, John Owens of Benkelman, Dr. Michael (Candice) Owens of McCook; sisters-in-law: Mary Lou Vrbas of Culbertson, Nebraska and Loretta Sandberg of Stratton, Nebraska and numerous nieces and nephews. A Rosary will be recited at 7:00 P.M. (MT) on Thursday evening, January 16, 2020 at St. Joseph’s Catholic Church in Benkelman with Father Matthew Eickhoff leading. A Funeral Mass will be held at 10:00 A.M. (MT), Friday, January 17, 2020 at St. Joseph’s Catholic Church in Benkelman with Father Matthew Eickhoff celebrating. Interment will follow services in the Benkelman Cemetery with Full Military Honors. Visitation will be Thursday afternoon, January 16, 2020 from 2:00-6:00 P.M. (MT) at St. Joseph’s Catholic Church in Benkelman. A memorial has been established to the Owens Family for future designation. Online condolences may be left at liewerfuneralhome.com BENKELMAN MEMORIAL CHAPEL IS ENTRUSTED WITH ARRANGEMENTS

The family of Jerry Owens created this Life Tributes page to make it easy to share your memories.