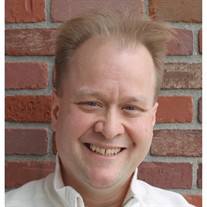 Jeremy Dean Blomstedt was born in McCook, NE, on August 29, 1974, the third of nine children, to Dennis C. and Frances M. (Bones) Blomstedt. In his young life he grew up and attended school in Palisade, graduating from Palisade High School in 1992. He went to attend the University of Nebraska, Lincoln, as a theater major and graduated with a degree in fine and performing arts. Jeremy married Amy Powell, the love of his life, on October 10, 2010, and they made a life together in McCook and Lincoln, NE. Jeremy, ever the creative talent, shared his gifts as an actor and filmmaker as well as his joyful spirit with all of his family and friends. He worked most recently at the University of Nebraska, Lincoln, in the Johnny Carson School of Theater of School and Film until his cancer rendered him unable to work. Previously, Jeremy worked as an assistant editor/journalist at the McCook Daily Gazette. Jeremy loved theater, film making, and bringing joy to others in his numerous stage performances. Jeremy’s sharp wit, intellect, and sense of humor were a part of his earliest days as he entertained friends and family as a child and impressed with his amazing gift for reading even as a toddler. Jeremy passed away peacefully in his home in Lincoln, NE, on August 5, 2020, after a nearly year- long battle with cancer. He was 45 years of age. Survivors include: Wife: Amy of Lincoln, NE. Father: Dennis Blomstedt of Palisade, NE. Sister: Melissa Palmer and husband Dwayne of North Platte, NE. Brother: Matthew Blomstedt and wife Angela of Central City, NE. Brother: John Blomstedt and wife Laura of Plattsmouth, NE. Brother: Vincent Blomstedt and wife Morgan of Cook, NE. Brother: Peter Blomstedt of Palisade, NE. Brother: Stephen Blomstedt and wife Sandrine of New York, NY. Brother: Timothy Blomstedt and wife Hannah of Norfolk, NE. Sister: JoanAnn Blomstedt of Lincoln, NE. Father and mother-in-law: John and Betty Powell of Sevierville, TN. Sister-in-law: Melissa Powell of Durham, NC. Nieces and Nephews: Jeffrey Heskett, Cassandra and Phil Schlagel, Nicholas Heskett, Elizabeth Heskett, Shemar Palmer, Emily Blomstedt, Megan Blomstedt, Katelynn Blomstedt, Claire Blomstedt, Erik Blomstedt, Catherine Blomstedt, Abigail Blomstedt, Edith Blomstedt, Vincent Blomstedt, Lesley Blomstedt, and Carl Blomstedt , (ages ranging from 6 to 28 years of age). Jeremy was preceded in death by his mother Frances of Palisade, grandparents John and Ida Bones of McCook, and Andrew and Helen Blomstedt of Palisade. A rosary (limited to invited family and friends) will be held on Friday, August 28, 2020, 7:00 p.m. (CT), at the Holy Family (Mihm) Catholic Hall in Palisade, Nebraska. A memorial Mass will be held Saturday, August 29, 2020, 2:30 p.m. (CT), at St. Patrick Catholic Church in McCook, Nebraska, with Fr. Bernard Lorenz and Fr. Gary Brethour officiating. Inurnment will be held at a later date. A memorial has been suggested to the Blomstedt family for a future designation. On-line condolences may be left at liewerfuneralhome.com LIEWER FUNERAL HOME OF WAUNETA ENTRUSTED WITH ARRANGEMENTS

Jeremy Dean Blomstedt was born in McCook, NE, on August 29, 1974, the third of nine children, to Dennis C. and Frances M. (Bones) Blomstedt. In his young life he grew up and attended school in Palisade, graduating from Palisade High School... View Obituary & Service Information

The family of Jeremy D Blomstedt created this Life Tributes page to make it easy to share your memories.