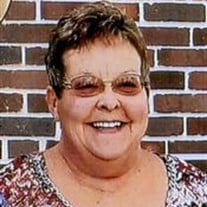 Janice Arlene (Wright) Goddard, 66, of Imperial, passed away peacefully in her sleep on Saturday September 7, 2013. Janice was born April 20, 1947, in Imperial, NE to Harold R. and Verlene (Willsey) Wright. She grew up on the family farm on the county line north of Imperial and graduated from the American School of Chicago, Ill on November 22, 1966. She married Garry Martin on April 12, 1964, and to this union three children were born, Shelley Rae, Richard “Rick” Lee and Jodi Lynn. They lived in North Platte, NE and Northglenn, CO until finally settling in a house they put together on the county line north of Imperial where they lived until Garry and Shelley’s deaths in February of 1979. On August 18, 1979, she married Marv Huddle. On July 14, 1995, she married Douglas Dutton. She found her final love, Lyle “Dick” Goddard, and married him on June 10, 2010. Janice worked a variety of jobs throughout her life including one as a bank teller at Stapleton Airport in Denver, CO where she met Wilt “The Stilt” Chamberlain. In Imperial she worked as a nurse’s aide at the Chase County Community Hospital, a librarian at the Imperial Public Library, a secretary at Cook’s Ready Mix and her most recent employment at Southside Liquor in Imperial, before finally retiring two years ago. Janice enjoyed knitting, planting and tending her garden, flowers and yard, feeding and watching “her” birds and chasing the squirrels off when they invaded her bird feeders. She was also an avid reader of books and loved jigsaw puzzles. In addition to these hobbies, her greatest love of all was her family, especially her husband, children, grandchildren, nieces and nephews. In addition to her many real family members, she gathered a large collection of “adopted children” through her life that considered her their second mother. A stranger was just a friend she hadn’t met yet and Janice had a smile and giggle for everyone she came across. She was a selfless lady when it came to the needs of others. All too often, she would put other’s needs ahead of her own. She was preceded in death by her first husband Garry Martin, daughter Shelley Rae, her parents, Harold and Verlene Wright, sisters Rhonda Beard and Karen Kunnemann, an infant sister Barbara Ann, nephews Jeff Kunnemann and Mike Beard, brother-in-law Jim Martin and former husband, Douglas Dutton. Janice is survived by her loving husband Lyle “Dick” Goddard of Imperial, children Richard “Rick” Lee and significant other Shana Subbert of Fremont, Ne, Jodi Lynn and fiancée Gary Smith of North Platte, Ne, Brother Bill and wife Carolyn of Grant, Ne, former brothers-in-law Terry Beard of Loveland, Co and Dan Kunneman of Imperial. Step-son Lyle Goddard and wife Traci of Wauneta, grandchildren Kalan Crowell, Joshua and wife Andrea Martin, Blaise Crowell, Mark Martin, Zaquery Thompson and step-grandchildren Jaycey Goddard and Joshua Starnes. Special nieces and nephews Angela (Kunnemann) Knerr and husband Jonathan, Brian Kunnemann and daughter Haley, Sherry Wright, Randy Wright and wife Heather with their children Emily and Clayton, Laura (Wright) Parde and husband Jeff, Jim Beard and many other extended family members and “adopted children”. A Celebration of Janice’s life will be held Saturday morning, September 14th, 2013, 10:30 A.M. at the United Methodist Church of Imperial, with Pastor Valera Heydenberk officiating. A private family inurnment will be held at a later date. A memorial has been established to the Imperial Public Library On line condolences can be left at liewerfuneralhome.com LIEWER FUNERAL HOME OF IMPERIAL IN CHARGE OF ARRANGEMENTS

Janice Arlene (Wright) Goddard, 66, of Imperial, passed away peacefully in her sleep on Saturday September 7, 2013. Janice was born April 20, 1947, in Imperial, NE to Harold R. and Verlene (Willsey) Wright. She grew up on the family... View Obituary & Service Information

The family of Janice Arlene Goddard created this Life Tributes page to make it easy to share your memories.