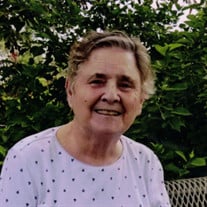 Janice Esther O’Neil was the third daughter born to Bernard and Dorothy O’Neil in Imperial, Nebraska, on December 19, 1939. In her formative years Jan grew up in Wauneta, Nebraska, and on the family farm located on the north divide. She was an active young lady, and was one of Wauneta’s first lifeguards in the 1950s. Jan was very athletic and loved being active, always trying all sorts of new things. Jan met Tony Cribelli in the fall of 1958 at the Neuman Center on the campus of Northern Colorado University. Tony was one of the very first people she met her freshmen year of school where she double majored in math and music. Music was a common bond between Tony and Jan. Jan went on to win the highly coveted “Cline” award. This award went to the most outstanding member of the University band. She was the first woman to win this trophy. Tony and Jan were one of the first couples married in the newly built St. John’s Catholic Church in Wauneta on June 22, 1962. The diamond necklace that Jan is wearing now was given to her by Tony as a wedding gift the night before the ceremony. This upcoming summer would have marked their 60th wedding anniversary. Adam Cribelli was born 10 months later in April of 1963, and Laurie was born 11 months after that in March of 1964. The couple made their home on the front range of Colorado where Tony taught music and Jan was primarily a homemaker, but also enjoyed operating a small yarn store and teaching knitting lessons. The family moved to “the family farm” in Wauneta in the summer of 1972. Jan moved back into the same farmhouse she had been raised in. From here, Jan was the glue of the family farm. She did everything. Not only was she the leader of the household, she also served as the farm’s hired hand. Jan raised a garden so the kids could enter produce at the county fair. She scooped corn and pulled calves. The whole family enjoyed monthly pitch parties with the rural neighborhood. Jan taught school for many years with a special passion for helping the kids that struggled in math, but her top priority was always the family and the farm. Jan was famous for meals that she would prepare for the whole crew on branding days as well as dinners that she took to the field during harvest. She had a love for needlecraft and entered several ribbon winning items at the State Fair. The people that she helped through her life is on a list too long to be counted. Her fun attitude was contagious and she never spoke a mean word about anyone. Everyone loved her. As grandkids joined the family, she became renowned for her playtime. As a grandma, she was not afraid of making childhood forts with the boys in the woods as well as leading an old fashioned water fight. Even in her older years, it was common for her to ask her family, “What have you been doing for fun?” While Alzheimer’s disease robbed Jan of some of her memories, it did not take away her spirit. She was always curious on the well-being of her husband, children, grand-children and even great grand-children. Jan was hard on a supply of chocolate and she especially enjoyed a bowl of ice cream! Jan died in Imperial, Nebraska, on October 21, 2021. She passed peacefully with Tony and her children at her side. She had a tremendous amount of love in her heart and was a blessing to us all. Jan was preceded in death by her parents, Bernard and Dorothy O’Neil; and brother-in-law Bud Kobel. Survivors include: Husband: Tony of Wauneta, NE. Son: Adam and Lori Cribelli of Cambridge, NE. Daughter: Laurie and Jeff Maris of Wauneta, NE. 4 Grandchildren: Brett and Emilie Cribelli of Cambridge, NE, and their two children, Karsten and Kash; Bo and Jenny Cribelli of Sutherland, NE, and their two children, Clay and Sybie; Jacob and London Maris of Wauneta, NE, and their daughter, Irelyn; and Joel Maris is attending college. Sisters: Kay Long (Ralph) of Denver, CO; Carol Kobel of Longmont, CO, and Marge Phillips of Fort Collins, CO. Mass of the Christian Burial will be held Monday morning, October 25, 2021, 10:00 A.M. (MT), at St. John Catholic Church of Wauneta, NE, with Fr. Lothar Gilde celebrating. Interment will follow at Riverside Cemetery, Wauneta, NE. A Rosary will be recited Sunday evening, October 24, 2021, 7:00 P.M. (MT), at St. John Catholic Church, Wauneta, NE, (Including Visitation). Memorials, in Jan’s memory, have been suggested to the Wauneta Care and Therapy Center or the St. John Catholic Altar Society of Wauneta. On-line condolences may be left at liewerfuneralhome.com LIEWER FUNERAL HOME OF WAUNETA ENTRUSTED WITH ARRANGEMENTS

Janice Esther O&#8217;Neil was the third daughter born to Bernard and Dorothy O&#8217;Neil in Imperial, Nebraska, on December 19, 1939. In her formative years Jan grew up in Wauneta, Nebraska, and on the family farm located on the north divide.... View Obituary & Service Information

The family of Janice E Cribelli created this Life Tributes page to make it easy to share your memories.

Janice Esther O’Neil was the third daughter born to Bernard and...