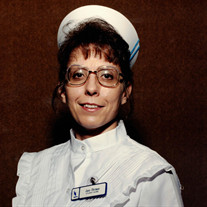 Vivian Jane (Sanford) Ohrman was born in Benkelman, Nebraska to Stanley Lloyd and Violet Mae (Garner) Sanford on January 9, 1953. She had four brothers: Jim, Jerry, Stan and Steve and one sister, Elaine Bird. Jane attended Dundy County High School where she met John Ohrman. There were married on September 7, 1972. From that union they had two children, Johnny (Kelly) Ohrman of Colby, Kansas and Teresa (Jason) Williams of Abilene, Kansas. She is also survived by five grandchildren: Shelby (Nicholas) Baney, Morgan (Mitchell) Shillington, Drake Webster, Alexandria Webster and Bailey Ohrman; four great-grandchildren: Thea Baney, Jax Shillington, Jannessa Webster and the bundle of joy coming in July. Jane was preceded in death by three boys, her parents, brothers and numerous others. Her greatest achievements were being a wife, mother, grand and great-grandmother. Also, becoming a nurse; she attended Colby Community College in Colby, Kansas and received her LPN and went on to work at the Thomas County Care Center in Colby. When she moved back to Benkelman she worked at Home Health Foot Care and before retiring worked at the Dundy County Hospital for seven years. Jane enjoyed working down at the Dundy County Fair owned Carnival for eleven years. Jane was an amazing wife, mother and grandmother. She had many friends and family that she held dear to her heart. She passed on January 21, 2019 at the Dundy County Hospital in Benkelman, she was 66 years of age. Memorial services will be held at a later date. No viewing; cremation was chosen. A memorial has been established to the Dundy County Fair Carnival Fund. Online condolences may be left at liewerfuneralhome.com BENKELMAN MEMORIAL CHAPEL IS ENTRUSTED WITH ARRANGEMENTS

The family of Jane Ohrman created this Life Tributes page to make it easy to share your memories.