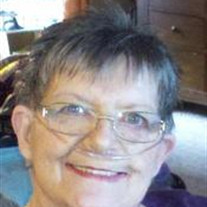 Jane Crawford On December 31, 2012 Jane Leona Crawford peacefully went home to be with our Father in Heaven. Jane was born on July 17, 1944 in Hastings, Nebraska to Curtis G & Bernadine Snyder. Her parents were taken from her at an early age and she was raised by her maternal grandparents Justus J & Grace Brinkema. Jane grew up in Imperial Nebraska and graduated from Chase County High School in 1962. It broke her heart to not attend her 50 year class reunion this past May. She had many dear friends from those early years. After high school, Jane went to Beauty School where she met and married Gary Crawford. With this union they were blessed with two girls, Paula & Denise. She soon found that motherhood was her new passion. She was a stay at home mom for several years, raising her daughters in the "way they should go". Jane returned to Imperial and began working at Chase County Senior Services in 1980. Her passion for reaching out and serving those who were in need began. She loved being close to her mom, Grace again. It was at this time she met the love of her life, Richard Mueller. The two of them enjoyed outdoor life. They loved camping, hunting, fishing and gardening together. They became avid auction goers and started many collections. They shared their love of life with all of their children and grandchildren. Jane had many things that brought her joy. She spent many hours reading. She loved flowers and had a knack for making beautiful arrangements. She crafted and loved beading. Jewelry was the one thing she could never get enough of. Family and friends were what brought her the most joy. Jane touched all who knew her and she knew no strangers. Later in life Jane relocated to Estes Park to be closer to her daughter, Paula. Her health declined and she spent the last 18 months of her life at Prospect Park Living Center. At this point in her life, she was able to return to that passion, serving and reaching out to those around her. This was a time of spiritual growth. Her last days were spent reflecting on life and focusing on going home. She was proceeded in death by her parents, grandparents and her life long partner, Richard Mueller. She will be missed by her daughters, Paula Scheil & husband, Mark of Estes Park, Colorado and Denise Gibb of Imperial, Nebraska. Grandchildren, Derek Scheil & wife, Jennifer of Aiea, Hawaii, Trevor Scheil & fiancé, Ashley Krull of Hastings, Nebraska, Grace Scheil of Estes Park, Colorado, Dylan Gibb of Hastings, Nebraska and Jordan Gibb of Imperial, Nebraska. The families of Richard Mueller and many special friends. Services were held on January 4, 2013 at 10:30 at Liewer Funeral Home, with interment at Mount Hope in Imperial, Nebraska with Pastor Todd Burpo officiating. Memorials are suggested to the family. Online condolences may be left at liewerfuneralhome.com Liewer Funeral Home of Imperial was in charge of arrangements.

Jane Crawford On December 31, 2012 Jane Leona Crawford peacefully went home to be with our Father in Heaven. Jane was born on July 17, 1944 in Hastings, Nebraska to Curtis G & Bernadine Snyder. Her parents were taken from her at an... View Obituary & Service Information

The family of Jane Leona Crawford created this Life Tributes page to make it easy to share your memories.