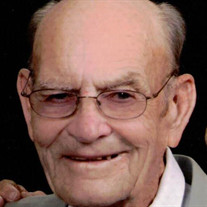 Powell James Edward Powell was born on June 23, 1929, at St. Francis, Kansas, to Roy and Pauline (Dunham) Powell. Later his family moved to Benkelman, Nebraska, where he grew up and attended school. James graduated from Benkelman High School in 1948. On September 26, 1948, he married Loretta Lee Reimer, and to this union three children were born: Carolyn June, James Lee, and Gregory Lynn. The family made their home in Benkelman, where Jim (as he was known), worked with his Father in the family business “Powell Implement” In 1956 the family moved to Denver, Colorado, where Jim worked for Stoval Ford, selling autos. Two years later, the family moved back to Benkelman, where Jim assisted his father on the family farm for a number of years until the sale of the farm. Jim was also employed for a time by the Nebraska State Highway Department. In the late 1970’s, Jim and Loretta became interested in antiques as son, Jim, started refinishing and selling them. In the early 1980’s, Jim and Loretta opened an antique shop in Benkelman, known as” Rawhide Antiques”, Jim was in charge of refinishing and Loretta was the head of sales. The couple operated the store until retirement. Jim enjoyed camping and fishing with his family and friends, he always wanted to catch the big one that got away. In 2003, he won a Master Angler Award in fishing, which he proudly displayed. Jim and Loretta also enjoyed gardening and the produce they raised. They also loved to follow their sons and watching the football and baseball games that they participated in. Jim passed away Thursday, April 19, 2018, at the Dundy County Hospital, Benkelman., NE. He was 88 years of age. Proceeding him in death were his parents, wife; Loretta of 68 years, son; Gregory, grandson; Trinity, and sister; Wauneta June (Powell) O’Neil. His survivors Include: Daughter: Carolyn Powell, of Benkelman, NE, Son: Jim Powell, of Longmont, CO. Grandson: Corey Lynn Powell, of Longmont, CO. Great-Grandson: Logan of Greeley, CO. Great-Granddaughters: Addison and Jacey Powell, of Greeley, CO. Nephews: Tom O’Neil and wife, Starla, of Lincoln, NE William O’Neil of Benkelman, NE Niece: Sandra (O’Neil) Shellpeper and husband, Fred, of Norfolk, NE. Cousin: Ruth (Powell) Pinkerton, of Benkelman, NE., Many friends and other relatives. Memorial services will be held Saturday morning, October 20th, 2018, 10:30 A.M. (Mountain Time) at the Zion Lutheran Church of Benkelman, NE., with Pastor Doug Hjelmstad officiating. Inurnment will follow the Benkelman Cemetery, Benkelman, NE A memorial has been suggested in Jim’s memory. Online condolences may be left at liewerfuneralhome.com BENKELMAN MEMORIAL CHAPEL ENTRUSTED WITH ARRANGEMENTS

The family of James Edward Powell created this Life Tributes page to make it easy to share your memories.