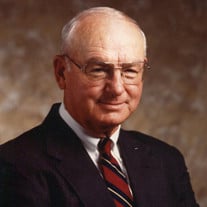 Wilfred Jackson “Jack” Maddux was born on May 7, 1932 to Glen and Eva (Fanning) Maddux in Imperial, NE and departed this life at his home in Wauneta, NE on November 24, 2019. He was 87 years of age. Jack graduated from Wauneta Public School in 1949 and from Colorado State University in 1953. He served a tour of duty as an Air Force Instructor Pilot. Jack returned home to the family operation and became the third generation on the Maddux Ranch, homesteaded in 1886. Due to the untimely death of his father he became general manager of Maddux Cattle Co. in 1958. That same year on December 30th he married Carol Smith and to this union three children were born: John Glen, Sandra Louise, and Mary Ann. Jack was totally devoted to his family and the ranch. He held a deep appreciation to all who worked with him through the years and he often said the most important thing we do in life is raise our family. Jack was a member of the United Methodist Church, mayor of Wauneta and a 4-H and Boy Scout leader. He took special pride in the number of boys in the troop who earned the rank of Eagle Scout. Jack’s continuous search for improving the cattle and the land eventually led him to serve as President of the Nebraska Stock Growers Assoc. and the Nebraska Section for Range Management. He became involved with the University of Nebraska Institute of Agriculture and Natural Resources serving on numerous boards and support groups through the years. He also served as chairman of the University of Nebraska Foundation. Jack was named to several boards with the National Cattleman Beef Assoc. and held several leadership roles with Cattle-Fax from its inception. His concern about water and natural resource policy issues led to his involvement in the formulation of Nebraska’s groundwater management legislation. Jack’s devotion to agricultural issues and the state in general led to his receiving many plaques and recognitions but he always maintained his reward was having the opportunity to know so many wonderful people. He had a genuine concern for each individual he met from school, up until the last days of his life. Jack was preceded in death by his parents, brother Eugene Maddux, sister in law Loree Maddux, sister-in-law Sylvia Burke and brother-in-law Edward Burke. Left to mourn his passing are his wife, of over 60 years, Carol, son John (Julia) Maddux of Imperial, NE, and daughters Sandra Maddux of West Linn, OR and Mary (Matt) Smith of Walnut Creek, CA. Grandchildren, Gabriel (Laura) Smith of East Haddam,, CT, Virgil Smith of Stanford, CA, Jacob Smith of San Diego, CA, Jackson Smith and Eva Smith of Walnut Creek, CA, Luke Conklin and Rebecca Conklin of West Linn, OR, Taylor Maddux and Thomas Maddux of Imperial, NE. Great Grandchildren, James, Madeleine and John Alexander Smith of East Haddam, CT. Funeral services for Jack were held on November 30, 2019, in the Wauneta United Methodist Church with Pastor Elias Mukindia officiating. Burial was held in Riverside Cemetery with full Military Honors. A reception will follow services at the Wauneta Community Building (Legion Hall). Friends and family are encouraged to attend and share a time of fellowship with the Maddux family. Memorials are suggested to the Maddux Family for future designation or charity of your choice. Online condolences may be left at liewerfuneralhome.com. Liewer Funeral Home of Wauneta was entrusted with arrangements.

The family of Jack Maddux created this Life Tributes page to make it easy to share your memories.