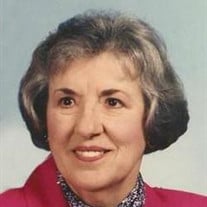 Irene Parkinson Mrs. Irene Parkinson passed away on May 8, 2014 in Imperial, NE. Irene was born in Muskegon, Michigan on August 1, 1931 to Stanley and Eva Usmial. Irene excelled in stenography and upon high school graduation in 1949, she was offered a position with the Department of Naval Personnel in Washington, D.C. That is where she met her husband, Lawrence, who was stationed with the U.S. Air Force at the Pentagon. They married in October of 1950 and traveled extensively throughout his military career. Irene and Larry were blessed with three daughters, Lorain, Suzanne and Janet. For many years their lives were centered around the activities of the girls. Irene made a home for the family wherever the Air Force took them. She always made the transition of moving and making new friends something to look forward. It brought Irene much happiness to be with her family playing games, eating, visiting, and just enjoying the togetherness. She loved her family more than anything. The couple selected the Mississippi Gulf Coast for retirement and happily resided there for 25 years. It was Hurricane Katrina in 2005 that changed their course of life and they moved to Imperial for their next home of residence in order to be close to their oldest daughter Lorain Vires and her husband Bruce. Irene was preceded in death by her parents and her three brothers Joseph, Leo and Edward Usmial. She is survived by her three loving daughters, Lorain (Bruce) Vires of Imperial, Suzanne Pritchett of Omaha, and Janet (Harold) Roll of Gautier, Mississippi. She has six grandchildren, Travis (Rebeccah) Vires, Tara (Rick) Foretich, Mitchell Vires, Chandler (Nick) Lettin, Austin Pritchett, and Ashley Roll. Great-grandchildren are Sasha, Tristan and Nadia Vires, and Kyle and Eryn Foretich. She also leaves her sister, Stella Jones, a sister-in-law, numerous nieces and nephews, and many close friends. A private service with full military honors will be held for Irene and her deceased husband Lawrence M. Parkinson at the Biloxi National Cemetery in Biloxi, Mississippi, on July 18, 2014. Liewer Funeral Home of Imperial is in charge of some of the arrangements.

Irene Parkinson Mrs. Irene Parkinson passed away on May 8, 2014 in Imperial, NE. Irene was born in Muskegon, Michigan on August 1, 1931 to Stanley and Eva Usmial. Irene excelled in stenography and upon high school graduation in 1949,... View Obituary & Service Information

The family of Irene Parkinson created this Life Tributes page to make it easy to share your memories.