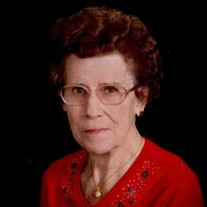 Imogene (Jean) Brown Welch was born on December 7, 1926, to John and Rossa (Krutsinger) Brown at the family home in rural Dundy County, Nebraska. She was the youngest of seven children. Jean passed away on February 28th, 2014, in Imperial, Nebraska. She was 87 years of age. Jean attended grade school at a country school in Dundy County, known as Dist. #56, riding a horse to school daily. She attended high school at Benkelman High School and graduated in 1944 with a teaching certificate. During WWII, she went to Bremerton, WA, to live with her older sister and worked in the Bremerton Navy yard in the sheet metal shop. When the war was over, she began teaching at Dunn school north of Max, NE, and the next year taught at Dist. #56. Jean met Don Welch at a dance in Imperial, NE, and on February 6, 1948, they were married at the court house by W.G. Adams, County Judge at Imperial, NE, and enjoyed 66 years together. They honeymooned at McCook, NE. They lived at Champion, NE, and she taught one year at Champion Grade School. Don and Jean then purchased a grocery store in Champion, which they owned and operated together for 43 years. After retirement in 1992 from the store, Jean worked at Einspahr Drug in Imperial and the Champion State Historical Mill, a job she enjoyed for 18 years. The marriage was blessed with two sons, Jon and Jim. In 1977, Jim and three friends were killed in a car accident. Jean had many talents and hobbies including painting pictures, photography, hunting arrowheads, roller and ice skating and golfing. Dancing was always something Jean loved. She was a member of the Eastern Star, PEO, Champion Sr. Women’s Club, charter member of the Champion Jr. Women’s Club, Frenchman Valley Art Association, and Champion Coffee Club and Community Center. She was a member of the First United Methodist Church of Imperial for around 60 years, and at one time played in the church bell choir and was a member of Miriam Ladies Church Group. Jean was preceded in death by her son Jimmy Don Welch; her parents; brothers Ken Brown and wife Idella, Bob Brown and wife Helen, Bill Brown and wife Violet (Bubbles); sister Lorraine Grimes; and sister-in-law Betty Brown. She was also preceded in death by her father and mother-in-law Linus and Elda Welch, brother-in-law Dwight Welch, and sister-in-law Beverly Claney. Survivors Include: Husband: Don Welch of Champion, NE. Son: Jon Welch and wife LaDonna of Champion, NE. Sister: Nina Fortkamp and husband Art of Wauneta, NE. Brother: Don Brown of Parks, NE. Brother-in-law: Jack Welch and wife Karen of Imperial, NE. Grandchildren: Jeremy Welch; Devin Dreiling and husband Duane. Great-grandchildren: Holden and Dylan Dreiling. Many nieces and nephews and a host of friends. Funeral services will be 10:30 A.M. (MT), Wednesday morning, March 5th, 2014, at the United Methodist Church of Imperial with Pastor Valera Heydenberk and Pastor Bob Call officiating. Interment will follow at Mount Hope Cemetery, Imperial, Nebraska. Visitation will be Tuesday afternoon, March 4th, 2014, 2:00-6:00 P.M. (MT) at the funeral home in Imperial. Memorials have been established to the Champion Community Center, Champion Coffee Club and the Champion Junior Women’s Club. Online condolences can be left at liewerfuneralhome.com LIEWER FUNERAL HOME IN CHARGE OF ARRANGEMENTS

Imogene (Jean) Brown Welch was born on December 7, 1926, to John and Rossa (Krutsinger) Brown at the family home in rural Dundy County, Nebraska. She was the youngest of seven children. Jean passed away on February 28th, 2014, in Imperial,... View Obituary & Service Information

The family of Imogene "Jean" Welch created this Life Tributes page to make it easy to share your memories.