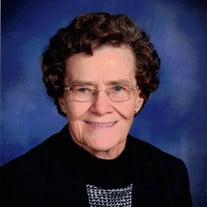 Ila Mae (Blecha) League passed away at her home early Saturday, November 30, 2019 at the age of 88 years. She was born April 23, 1931 just minutes before her identical twin sister, Lila, in Benkelman, Nebraska. Ila and Lila were the fifth and sixth children of Albert and Hattie Blecha. They attended Benkelman High School, where Ila graduated in 1949. Around that time, she met Roy League at the Rainbow Roller Rink and they were married in a double ceremony with Lila and Keith Manley on June 25, 1950 in Benkelman. That same day, the Korean War broke out and Roy was soon sent to serve his country. Ila lived and worked in Denver, Colorado while Roy was overseas. Once he was discharged, the couple returned to Stratton to start their family. Ila was proud to be a member of the Stratton community. She volunteered as the Librarian at the community library and worked at the hospital prior to its closure in 1975. As small business owners themselves, Roy and Ila were strong supporters of local businesses in Stratton and the surrounding area. Ila’s favorite things in life were her family, her dogs, and her community. Her grandchildren remember her as the dedicated grandmother who attended all of their concerts and sporting events, and ensured each of them made it to Lincoln every fall to cheer on the Huskers. They spent many lazy summer days reading books and toiling over massive puzzles with her. Ila’s great-grandchildren loved visiting Grammy and her dogs, and never left without getting a bowl (or two) of her homemade chocolate ice cream. Ila was a member of the United Methodist Church in Stratton for over 60 years, serving on various boards, as confirmation mentors, etc. She was also a long-time member of Eastern Star. Ila is survived by her sister, Virginia; son Gary League and his wife Reta; son Denis League and his wife Deborah; granddaughter Jeri Schlickbernd and her husband Mike, their children Maya, Ivy and Caleb; granddaughter Erica DeLeon and her husband Noel, their children Ethan, Jadyn, Bryn and Daxon; grandson Derik League and his wife Amanda, their children Mariah, Ashley, Ryley, Hayden, and Taylor; grandson Dustin League and his wife Erin, their children Arya and Delian. She is also survived by numerous nieces and nephews and a host of other family members and friends. She was preceded in death by her husband Roy, daughter Kathy, twin sister Lila, and her siblings Walter, Dale, and Mary Helen. Funeral services will be 10:00 A.M. (CT), Thursday morning, December 5, 2019 at the Community United Methodist Church in Stratton, Nebraska with Pastor Rod Heilbrun officiating. Interment will follow services in Rose Hill Cemetery, Stratton, Nebraska. No viewing; Ila’s wish was for a closed-casket service. A memorial has been established to Grandview Retirement Center in Stratton, Nebraska. Online condolences may be left at liewerfuneralhome.com LIEWER FUNERAL HOME IS ENTRUSTED WITH ARRANGEMENTS

Ila Mae (Blecha) League passed away at her home early Saturday, November 30, 2019 at the age of 88 years. She was born April 23, 1931 just minutes before her identical twin sister, Lila, in Benkelman, Nebraska. Ila and Lila were the fifth... View Obituary & Service Information

The family of Ila Mae League created this Life Tributes page to make it easy to share your memories.