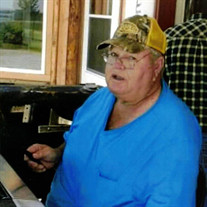 Harold Wayne Harmon was born August 7, 1937, at Imperial, Nebraska, to George and Marietta (Munson) Harmon. Harold grew up and attended school in the Champion-Lamar, Nebraska area. As a young man he assisted on the family farm and became a farmer... View Obituary & Service Information

The family of Harold Harmon created this Life Tributes page to make it easy to share your memories.