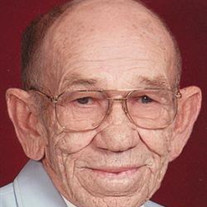 HARLAN E. SMITH     Harlan Eugene Smith was born on November 2, 1927, the eldest of two sons, to Theodore F. and Esther E. (Anderson) Smith in Hazard, Nebraska. His education was mainly in rural schools in the Pleasanton, Nebraska, area until his junior year of high school when he moved to Ravenna, Nebraska, with his parents. He graduated from Ravenna High School in 1945. He attended college at Kearney State College.   In November of 1950, he married Rosetta Jane Steele. Four children were born to this union: Steven Edward, Michael Harlan, Teri Jean and Richard Allen. In 1950 he began working for Nebraska Irrigation Engineering Company in Kearney, Nebraska, as a rod man on a survey crew. He was promoted to instrument man and assistant engineer in 1952. The following year he was assigned the position of head engineer. In July of 1959 he and his brother Delmar formed their own land leveling and engineering company in Kearney. When the majority of their work began to be in the McCook and Imperial areas, they moved their business headquarters to Imperial in 1962. It was that year the company, along with Haggard Drilling and Brown Chemical, established their businesses in Imperial, which became one of the largest and fastest irrigation development counties in the state of Nebraska. Within a period of ten years most of the land that could be developed for flood irrigation was nearly depleted and the beginning of the era of center pivot irrigation was the only feasible method to irrigate due to the rapid decline of the Ogallala Aquifer. Therefore the company was dissolved in 1971. The following year the business known as H.E. Smith & Sons Surveying and Engineering Consulting Firm was formed. The company was active until Harlan’s retirement in the mid-1990’s.   Harlan married Joy L. Einspahr Molzahn on August 14, 1971, at Zion Lutheran Church in Imperial, Nebraska. He was baptized and confirmed in 1985 becoming a member of Zion Lutheran Church. He was a past member of the Nebraska Conservation Contractors Association, past member of Kearney and McCook Elks, president of Enders Lake Golf Club, charter member and first treasurer of Imperial Fraternal Order of Eagles. He was a certified American Legion baseball umpire and a certified basketball official for 25 years. Harlan was instrumental in starting the youth baseball program in Imperial.   Harlan passed away March 18, 2014, at the Chase County Community Hospital in Imperial, Nebraska, at the age of 86. He was preceded in death by his parents, Theodore and Esther Smith; his brother Delmar and sister-in-law Betty; daughter-in-law Sandra (Browning) Smith; grandson Wade Smith; father-in-law and mother-in-law Walter and Evelyn Einspahr; sister-in-law Rita Ackermann; and brother-in-law Kenneth Rider.   Survivors include: Wife: Joy of Imperial, NE. Sons: Steven and wife Peggy of Imperial, NE. Michael and wife Ann of Imperial, NE. Dick and companion Susie of Omaha, NE. Daughter: Teri Spady and husband Lennie of Imperial, NE. 14 Grandchildren. 21 Great-grandchildren. Stepson: Michael Molzahn and companion Diana. Numerous nieces, nephews, cousins and many friends who knew him, not by Harlan, but merely “Smitty”.   Funeral services will be held Friday, March 21st, 2014, 10:30 a.m. (MT), at Zion Lutheran Church, Imperial, Nebraska, with Pastor David Kahle officiating. Interment will follow at Mount Hope Cemetery, Imperial, Nebraska. Visitation will be held Thursday afternoon, March 20, 2014, 2:00-6:00 p.m., at the funeral home in Imperial. A memorial has been established in Harlan’s name or to the donor’s choice.   On-line condolences may be left at liewerfuneralhome.com   LIEWER FUNERAL HOME IN CHARGE OF ARRANGEMENTS

HARLAN E. SMITH     Harlan Eugene Smith was born on November 2, 1927, the eldest of two sons, to Theodore F. and Esther E. (Anderson) Smith in Hazard, Nebraska. His education was mainly in rural schools in the Pleasanton, Nebraska, area until... View Obituary & Service Information

The family of Harlan E. Smith created this Life Tributes page to make it easy to share your memories.