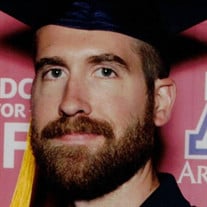 Hans Erik Meyer, 36 of Tucson, Arizona, passed away on June 21, 2021, in Springerville, Arizona. He was born October 8, 1984, in West Point, Nebraska, to Gregg and Terri (Stahl) Meyer. Hans attended elementary school in Crete, North Platte, and Butte, Nebraska, before moving to Imperial, Nebraska, in 1994, where he graduated in 2002. After high school, Hans attended Southeast Community College in Milford, Nebraska, obtaining an Associate’s Degree in Electrical Technology in 2005 and earned his Associate’s of Science in Chemistry at Mesa Community College in 2013. He then moved to Tucson to continue his studies. He earned his Bachelor of Arts Degree in Physics with minors in Math and Chemistry from the University of Arizona in May 2015. Hans worked at Super Foods, Owen’s True Value, and for Kerry Bernhardt during high school. He spent a few months in Iowa working at the top of newly erected wind generators. He then moved to Phoenix, Arizona as a temporary electrician with CES America and ended up with his Journeyman’s License working for Delta Diversified Ent. (DDE). After the economy fell and he was laid off, Hans went back to school at the University of Arizona. While at the University of Arizona, Hans worked at the University Bookstore from 2012-2016 and eventually became an assistant manager and the Textbook Inventory Specialist. In addition, he tutored as a teacher assistant for the Physics Department. Hans spent a few months as an Officer Recruit with the City of Tucson Police Department before moving on to his last place of employment with Leidos, first as a Billing Analyst II and progressing to a Project Accountant for government and commercial customers, in Tucson, Arizona. In Imperial, Hans was active in AWANA, swim team and FFA. He enjoyed going to Enders Lake with his SeaDoo, and his beautiful blue merle, Shetland sheepdog, Kess. Later in life, Hans enjoyed reading for knowledge, running, biking and hiking in the mountains around Tucson. Hans was a mentor, a great friend and was very kind to whomever he encountered. Captivated by mountain views and desert landscapes, Tucson was his home. He was always planning a long hike/run at Sabino Canyon, biking up Mount Lemmon, camping in Sedona, or running The Loop (Tucson). He volunteered his time at aid stations for marathons and was passionate about preserving and maintaining The Arizona Trail. He enjoyed reading. In his leisure he was often reading under a tree at the University of Arizona. He had been heading to the White Mountains of New Mexico for an extended camping trip when he passed away from a medical condition. Hans was preceded in death by his paternal grandparents, J. Walter and Delores (Pagels) Meyer of West Point, Nebraska, and his maternal grandparents, Chris and Verla (Perry) Stahl of Kimball, Nebraska; Aunt Kathy Pearson and cousins, Gina and Roger Pearson of Oakland, Nebraska; and infant niece, Isabella Bernache and infant nephew, Uriah Bernache of Kearney, Nebraska. Survivors Include: Parents: Gregg and Terri Meyer of Imperial, NE. Sisters: Holly Bernache and husband, Shiloh, of Kearney, NE. Halee Moreno and husband, Jose, of Bingham, NE. 11 Nieces and Nephews: Arabella, Eliza, Elliott, Olivia, Hannah, and Apphia Bernache; and Naroli, Gideon, Adelaine, Elias and Asher Moreno. Aunts and Uncles: Stan Pearson of Oakland, NE; Burnie/Eileen Meyer of Rockville, MD; Duane/Debra Meyer of West Point, NE; Gary/Stephanie Meyer of Broken Bow, NE; Richard/Jeanette Stahl of Potter, NE; David/Marla Stahl of Lincoln, NE; and Tom/Christy (Stahl) Adams of Sundance, WY, as well as numerous cousins. Funeral Services will be held Monday, July 5, 2021, 10:30 A.M. at the Imperial Berean Church, Imperial, with Pastor Clarence Patterson and Pastor Matt Maxwell officiating. Interment will follow at the Crete Cemetery, Champion, NE. Private Family Visitation only. Memorials have been suggested to the Arizona Trail Association @ aztrail.org or the Southern Arizona Roadrunners @ azroadrunners.org Online condolences may be left at liewer funeral home.com LIEWER FUNERAL HOME ENTRUSTED WITH ARRANGEMENTS

The family of Hans E Meyer created this Life Tributes page to make it easy to share your memories.