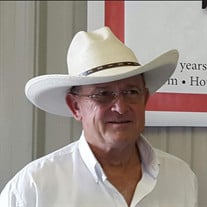 ESKEW Marlon Gregory Eskew was born on February 18, 1956, in Imperial, Nebraska, to Leonard “Tex” and Arlene (Robb) Eskew. He was a lifelong resident of Chase County growing up and graduating from Chase County High School. Greg worked as the Chase County Road Superintendent, independent truck driver, and his greatest joy was being an auctioneer. You could always find him at an auction either selling or buying. Greg was a member of both the Nebraska and South Dakota Auctioneer‘s Associations. Greg loved his draft horses and ponies. He took great pride in training his teams to be used for work or pleasure. Greg would rather use a team of drafts to get a job completed than use conventional machinery. As we all know, Greg was always up for a conversation and had very few strangers in his life. You were always greeted with a smile and knew you had to be there for a while. Greg passed away on his own terms, Monday evening, September 4, 2017, at the Great Plains Regional Medical Center, North Platte, NE. He was 61 years of age. Greg was very proud of his business, his children and grandchildren. He is survived by: Mother: Arlene of Imperial, NE Daughter: Debra Hand and Husband, Brad, of Giltner, NE Son: Aaron and wife, Ashley, of Imperial, NE 4 Grandchildren: Sebastian, Adelle, Cy, and Aiden Brothers: Bill and wife, Kristy of Champion, NE Bob and wife, Susan, of Imperial, NE Doug of Imperial, NE Sister: Robin Eskew of North Platte, NE Special Friend: Beth O’Dea of McCook, NE Greg is preceded in death by his father “Tex”, niece; Heather Smith and Nephew; Chris Tidball. Funeral Services for Greg Eskew were held Friday morning, September 8th, 2017, 10:30 A.M. (Mountain Time) at the United Methodist Church of Imperial, with Kent Swink officiating. Interment followed at Mount Hope Cemetery, Imperial, NE Visitation was held Thursday afternoon, September 7th, 2017, 2:00 P.M. – 6:00 P.M. at the funeral home in Imperial. A memorial has been established in Greg’s memory Online condolences maybe left at liewerfuneralhome.com LIEWER FUNERALHOME ENTRUSTED WITH ARRANGEMENTS

ESKEW Marlon Gregory Eskew was born on February 18, 1956, in Imperial, Nebraska, to Leonard &#8220;Tex&#8221; and Arlene (Robb) Eskew. He was a lifelong resident of Chase County growing up and graduating from Chase County High School. Greg... View Obituary & Service Information

The family of Greg Eskew created this Life Tributes page to make it easy to share your memories.