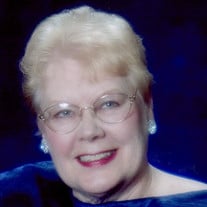 Gloria Marie Lang Gloria Marie Kauffman Lang was born on September 21, 1937, the only child of Orlie R. and Marie L. (Schrader) Kauffman. The family was longtime residents of Benkelman, NE, Dundy County, living on a farm outside of Benkelman, NE before moving to town in 1939. Gloria attended church from birth at Benkelman Baptist Church, and later became a member of Trinity Baptist Church. She received Christ as her savior and was baptized at the age of five. Gloria loved school and learning. She was also quite musical; displaying a talent for both singing and playing the trombone. She led the high school marching band as a drum majorette, practicing quite often in her parent’s front yard. Gloria worked at the Zorn Theater during her teenage years and enjoyed “buzzing” Main Street in her favorite pink and white Ford Crown Victoria. Gloria graduated from Benkelman High School with the class of 1955. Gloria’s extended education included McCook Junior College and the University of Northern Colorado in Greeley with a degree in teaching. She taught in Holdrege, NE and kindergarten in Colorado Springs, CO. Gloria was united in marriage on June 20, 1964 to Fred J. Lang of Chipita Park, CO. The couple made their home in Colorado Springs then later in Parker, CO. To this union was born a beautiful daughter, Kara Michelle on October 6th, 1969. Gloria was very friendly and outgoing. She valued God, family, and friendships. She was compassionate and merciful. Gloria enjoyed volunteering at the church. One of her greatest joys in life was calling on people who were hurting to offer encouragement. She dearly loved her pet dog, Poofy, and drives through the mountains to view the changing fall colors. She loved to celebrate birthdays and holidays and found great pleasure in decorating for the occasion. Although she experienced many medical challenges throughout the years, Gloria was thankful for every year God gave to her. Loved ones left behind are Fred J. Lang, daughter Kara M. Lang, cousins Joann (Bob) Krutsinger of Benkelman, NE and family, Kaylene (Eugene) Pracht of Broken Bow, NE and family, Shirley (Glen) Lemon of Max, NE and family, Cindy (Bill) Cawthra of Max, NE and family, Howard John Schrader, Jr. of Lincoln, NE and dear friends. Gloria was preceded in death by her parents. Gloria left this earthly life, at the age of eighty, on August 8, 2018. She will be missed by all of her loving family and friends. Funeral services will be held Friday Morning, August 17th, 2018, 10:30 A.M. (Mountain Time) at the Trinity Baptist Church, Benkelman, Nebraska, with Pastor Mike Clements officiating. Interment will follow at the Benkelman Cemetery. Visitation will be held before services Friday Morning, August 17th, 2018, 8:00-10:00 A.M. (Mountain Time) at the Trinity Baptist Church, Benkelman, Nebraska In Lieu of flowers, memorials have been suggested to Gloria's favorite charities: In Touch Ministries, The Gospel Tract Society, and the St. Jude’s Children’s Hospital. (All of which can be found on the Web) BENKELMAN MEMORIAL CHAPEL ENTRUSTEFD WITH ARRANGEMENTS

Gloria Marie Lang Gloria Marie Kauffman Lang was born on September 21, 1937, the only child of Orlie R. and Marie L. (Schrader) Kauffman. The family was longtime residents of Benkelman, NE, Dundy County, living on a farm outside of Benkelman,... View Obituary & Service Information

The family of Gloria M. Lang created this Life Tributes page to make it easy to share your memories.