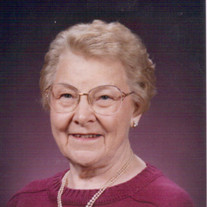 Gladys L. Heater Gladys Lucille Raichart Heater was born February 6, 1920, at home on a homestead north of Max, Nebraska, to Boyd and Clara E (Green) Raichart. She passed away at the Hillcrest Nursing Home in McCook, Nebraska, on October 16, 2016. In 1928, Gladys’ family moved to the farm south of Max, enjoying the good and bad of those early years—from the dirt storms of the early ‘30s to the great flood of 1935 which Gladys and her brother Verle watched from the north bedroom window of their home. Gladys graduated from Max Rural High School in 1940. After high school, Gladys went off to Denver to attend Success Business School. On November 19, 1944 Gladys was united in marriage to Stewart E. Heater at the home of Stewart’s parents in Max, Nebraska. Stew was in the Navy Medical Corps, so the couple was off to California and then to Glenwood Springs, Colorado. When Stew as discharged from the Navy in October of 1945, the couple settled in Denver, Colorado. During her more than 60 years in Denver, Gladys worked for the Gates Rubber Company, the Public Service Company, and Montgomery Wards. Stewart and Gladys also operated a small radio and TV repair business. In the early 1950s, Gladys and her husband adopted an eight year old little boy, Billy. Gladys and her family enjoyed many years of the Colorado outdoors—camping, fishing, and Gladys’ favorite, water skiing, In January 1987, Gladys and Stewart both started working at Fort Logan Mental Health Center in Denver. Due to health issues, Stewart took early retirement in 1976, but Gladys continued to work for the Center for 20 years, until her retirement in 1987. After her retirement, Gladys continued with her adventurous spirit. She and Stew had visited all fifty states, all the providences in Canada, and took a railroad trip through old Mexico. So Gladys decided to see the rest of the world. She enjoyed tours of the European countries with her church group from the Englewood United Methodist Church of which she was a fifty year member. She also traveled with friends from her Ladies Auxiliary Chapter 1247, VFW Post 5061. She kissed the Blarney Stone in Ireland, held up the Leaning Tower of Pisa, and explored the Parthenon in Greece and the outback of Australia. Gladys was not one to stay idle. Besides being active in her church and the VFW, Gladys was very proud of her accomplishments in the Order of the Eastern Star. She was initiated into Eastern Star on December 5, 1949. During the next fifty years, she served faithfully, holding most of the offices, including Worthy Matron, and all but one point of the Star. Gladys, already a Bronco fan, became a season ticket holder for the “new” baseball team, the Rockies, following them faithfully and was present when they went to the World Series in their third year. In 2008, Gladys sold her home in Denver and moved to McCook, Nebraska, to be closer to her family. Willow Ridge (Brookdale) Senior Living Center became her new abode. She enjoyed the activities and the people there, but missed the Denver area. In 2013 Gladys encountered some health issues. She moved from independent living to assisted living, and finally, to Hillcrest Nursing Home in May of 2016 where she passed away on October 16. Gladys was preceded in death by her parents Boyd and Clara, her husband Stewart, her son Billy, her nephew Kenny Raichart, and twin sisters and a brother who died in infancy. She is survived by her brother Verle Raichart; niece Cathy Donze and husband Bill of McCook, Nebraska; nephew Kelly Raichart and wife Marcia of Benkelman, Nebraska; niece Kristi Gordon and husband Wesley of Palisade, Colorado; nephew Jerry McDonald and wife Brenda of Stratton, Nebraska; nephew Scott McDonald and wife Peggy, also of Stratton, Nebraska; niece Nancy Fasano of Denver, Colorado, sister-in-law Doris McDonald, many great-nieces and nephews, and also many friends from Eastern Star and the VFW family. “Aim for the stars. Keep your sights high, Your heart full of faith within. With your feet on the ground, Eyes to the sky, Someday you are bound to win.” Gladys Heater Funeral Services will be held Saturday, October 22, 2016, 10:30 A.M. (Mountain Time) at the United Methodist Church of Benkelman, with Rev. Melody Newman officiating. Interment will follow at the Benkelman Cemetery, Benkelman, NE Visitation will be held Saturday morning, October 22, 2016, before services, starting 8:30 A.M. (Mountain Time), at the United Methodist Church of Benkelman. Memorials have been established to the Max Community Center, and the Max Methodist Church. Online condolences maybe left at [email protected] BENKELMAN MEMORIAL CHAPEL ENTRUSTED WITH ARRANGEMENTS

Gladys L. Heater Gladys Lucille Raichart Heater was born February 6, 1920, at home on a homestead north of Max, Nebraska, to Boyd and Clara E (Green) Raichart. She passed away at the Hillcrest Nursing Home in McCook, Nebraska, on October 16,... View Obituary & Service Information

The family of Gladys L Heater created this Life Tributes page to make it easy to share your memories.