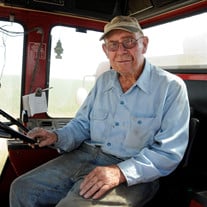 Gilbert John Greim was born to Herman F. and Katherine S. (Ahrens) Greim on February 4, 1928 in Chase County, Nebraska. He attended school through the eighth grade at Immanuel Lutheran Parochial School in the Champion Valley and went on to graduate from Chase County High School with the class of 1948 Gilbert recently attended his 70 year class reunion. Gilbert was united in marriage to Leona Loretta Bartels on August 3, 1963 at Zion Lutheran Church in Imperial, Nebraska. The couple moved into the family farm as Gilbert’s parents relocated to the city of Imperial. Gilbert made the farm his home for the remainder of his life until he moved to the Imperial Manor in January of 2019. Gilbert and Leona’s lives revolved around the Greim Farm. He raised corn and wheat and cared for cattle and hogs. Gilbert was also a local seed agent for Garst and ICI. He enjoyed hunting and a good game of cards, but at the end of the day Gilbert was a farmer and working in the fields and caring for his livestock was his life’s work, hobby and legacy all wrapped into one. Gilbert passed away early Tuesday morning, May 14, 2019 at the Imperial Manor Nursing Home in Imperial. He was 91 years of age. He was preceded in death by his parents; and infant nephew, DeWayne Dean Greim; brother, Melvin Herman Greim; sister, Larita (Greim) Bartels; brother-in-law, Leonard Bartels; and sister-in-law, Arline Greim. Survivors include Wife, Leona Greim of Imperial, Nebraska Brother-in-law, Gerald Bartels and wife, Carol of Franklin, Nebraska Niece, Joann Magdanz and husband, Dave of Houston, Texas Niece, Carol Greim of Omaha, Nebraska Nephew, DeWayne Greim of Omaha, Nebraska Great-nieces: Amy Rose and husband, Trevor of Chevy Chase, Maryland and Lindsey Crawford and husband, Mike of Cincinnati, Ohio Great-great-niece and nephews: Jonathan and Charlotte Rose and Luke and Noah Crawford Funeral services will be 10:30 A.M. (MT); Saturday, May 18, 2019 at Zion Lutheran Church in Imperial with Pastor David Kahle officiating. Interment will take place in Mount Hope Cemetery, Imperial, immediately following services. Visitation will be held Friday afternoon, May 17, 2019 from 2:00-6:00 P.M. (MT) at the funeral home in Imperial. In lieu of flowers, memorials are suggested to the Zion Lutheran Church in Imperial and the Imperial Manor Nursing Home. Online condolences may be left at liewerfuneralhome.com LIEWER FUNERAL HOME OF IMPERIAL IS ENTRUSTED WITH ARRANGEMENTS

Gilbert John Greim was born to Herman F. and Katherine S. (Ahrens) Greim on February 4, 1928 in Chase County, Nebraska. He attended school through the eighth grade at Immanuel Lutheran Parochial School in the Champion Valley and went on to... View Obituary & Service Information

The family of Gilbert Greim created this Life Tributes page to make it easy to share your memories.