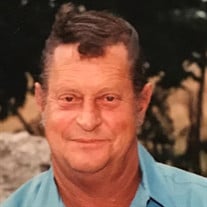 Gernon “Butch” Dale Crider was born at home in Eminence, Missouri on Sept. 16, 1950 to Austin George and Rosetta D. (Dorow) Crider. Butch grew up in the back-woods around Eminence and graduated Eminence High School in 1968. Later his work led him to Imperial, Nebraska, near where his grandparents had lived and his mom was raised when she was younger. During Butch’s working years, he travelled extensively with work at Western Well & Pump in Imperial. To be closer to home to Marilyn and kids, he also worked for many years at Terryberry Farms with Marilyn’s brothers in Imperial. Family was important to Butch. He always kept in touch with his family. He called everyone—brothers, sisters, and his kids, weekly. And he was always a practical joker and loved to be ornery, it was his life’s mission, up to the end; he liked to make people smile and laugh. Butch passed away June 27, 2020. He was 69 years old. Butch was married to Sarah Baldwin and is survived by their daughter, Kathy . Later Butch made his life with Marilyn K. Iverson of Imperial and raised six children, Jerome Iverson and wife, Anne, of Lincoln; Marie Iverson of Dallas, Texas; Theresa Schilke and husband, John, of Imperial; Raquel Ball and husband, Danny, of Norman, Oklahoma; David Iverson and wife, Jennifer, of North Platte; and, Jason Iverson, and his wife, Kristin, of Fort Worth, Texas; 17 grandchildren; 12 great-grandchildren; sister Donna Bilbrey of House Springs, Missouri; sister Carol Dizmang, of Wauneta; sister Marilyn Neal of Jefferson City, Missouri ; sister Shirley Trogdon of Mount Vernon, Missouri; brother Charles Crider (Beverly) of House Springs, Missouri; brother Jerry Crider of Eminence, Missouri; brother Paul Crider (Terry) of Highlandville, Missouri; brother Keith Crider of Galena, Missouri, and numerous cousins, nieces and nephews. Butch is preceded in death by Marilyn Iverson; his parents; his brothers, Marvin and Leroy; sisters, Nada, Rhonda, and Rena; and great-grandchild, Avery. Graveside Inurnment Services will be held Saturday, September 19, 2020, 4:30 P.M. at Mount Hope Cemetery, with Pastor David Kahle officiating. A memorial has been suggested to Theresa Schilke Family in Butch’s memory, for a future designation.

Gernon &#8220;Butch&#8221; Dale Crider was born at home in Eminence, Missouri on Sept. 16, 1950 to Austin George and Rosetta D. (Dorow) Crider. Butch grew up in the back-woods around Eminence and graduated Eminence High School in 1968. Later... View Obituary & Service Information

The family of Gernon "Butch" Crider created this Life Tributes page to make it easy to share your memories.