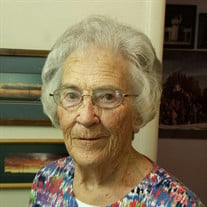 Garneta Junell Bauerle was the oldest of three children born to Charles Leon and Cora Leoma (Glasgow) Kimberling. She was born June 26, 1925, at the Kimberling Ranch southwest of Champion. Garneta passed away peacefully in hospice on Feb. 20, 2021, at the Imperial Manor. Garneta attended Crete Grade School about a mile from home. She attended Chase County High School, graduating when she was just 16 in 1942. Following high school, Garneta went to business college in Hastings, followed by studying at Children’s Hospital School of Nursing in Denver, where she graduated as an RN in 1946. She first met her future husband, Irvin Bauerle, in band at Chase County High School. They were married on April 13, 1947, when he finished military service. Garneta and Irvin lived near Champion for a few years before moving into the farmhouse on the hill in 1956. Together they raised six children: Mary Lynn, Marcia Ann, Marla Kaye, William (Bill), Michael (Mike) and Margaret. In her late 40s, she developed an autoimmune condition and was given six months to live. During this time, she began working on what became “Country Cooking”—the Bauerle cookbook—which was later featured in an article in Family Circle magazine. In addition to raising six children, Garneta was an active member of the Champion and Imperial communities. She was a founding member of POMPOMS, active in the Champion Women’s Club, was an election official and Cancer Society volunteer. She was also a member of the First United Methodist Church in Imperial, where she was active in UMW, attended Bible studies, taught Sunday school, mentored confirmands, quilted with the peacemakers, sang in the choir and was part of the restoration of the stained glass present in the church today. Garneta also worked with the veterans’ auxiliary, the hospital auxiliary and was a Boy Scout den mother. She worked day shifts at the clinic and night shifts at the hospital. Her skills also turned her into a country nurse, seeing patients at her home who couldn’t make it into town. Garneta also dedicated time to the food pantry and local 4-H clubs, where she did numerous baking demonstrations. Family was very important to Garneta. Her six children blessed her with 16 grandchildren and 19 great-grandchildren. She made a personalized quilt for each of her grandkids when they graduated high school. Other hobbies and interests included painting, puzzles, arrowhead hunting, journaling, genealogy and music. She will be remembered as a positive and selfless woman who never gave handshakes; only hugs. Garneta was able to remain at the farm with Irvin up until her time in hospice thanks to the outstanding help of caregivers Kala Holmes, Dawn Weber and Mary Ann Eaglin. Garneta is preceded in death by her parents; sister Oneta Silvester and Bill Silvester; and sister-in-law Betty Kimberling. She is survived by husband Irvin; brother Cleon Kimberling of Fort Collins, Colorado; children Mary Lynn (Brian) Horst of North Platte; Marcia Ann (Jim) Lindau of Axtell; Marla Kaye (Terry) Hill of Danville, Illinois; William (Marcia) Bauerle of Imperial; Michael (Jill) Bauerle of Imperial; and Margaret (Jeff) Nelson of Omaha; grandchildren Brock (Lisa) Lindau of Blair; Carrie (Marc) Regier of Henderson; Brandon (Lisa) Lindau of Seward; Brett (Marissa) Lindau of Grand Junction, Colorado; Courtney (Dale) Hemker of Danville, Illinois; Jeremy (Nagehan) Hill of Saint Charles, Missouri; Laura Lynn Horst of Lincoln; Maika (Scott) Leibbrandt of Imperial; Megan (Kevin) Kelley of Imperial; Lucas Bauerle of Clovis, New Mexico; Andrew Nelson of Omaha; Quinn Nelson of Omaha; Anna Bauerle of Lincoln, Emma Bauerle of Lincoln; Jack Bauerle of Lincoln; and Bennett Bauerle of Crete; 19 great-grandchildren and numerous nieces, nephews and cousins. Funeral Services will be held Saturday morning, February 27, 2021, 10:30 A.M., at the First United Methodist Church of Imperial, with Pastor Debra Copple officiating. Interment will follow at Mount Hope Cemetery, Imperial, NE. Visitation will be held Friday afternoon, February 26, 2021, 2:00 PM-6:00 P.M. at Liewer Funeral Home, Imperial. Memorials in Garneta’s memory have been suggested to the Chase County Food Pantry, The Imperial EMS, and the Rainbow Promise Preschool of Imperial. Cards can be sent to Irvin at 73591 328 Avenue, Champion, NE 69023 On line condolences may be left at Liewer Funeral Home.Com LIEWER FUNERAL HOME ENTRUSTED WITH ARRANGEMENTS

Garneta Junell Bauerle was the oldest of three children born to Charles Leon and Cora Leoma (Glasgow) Kimberling. She was born June 26, 1925, at the Kimberling Ranch southwest of Champion. Garneta passed away peacefully in hospice on Feb. 20,... View Obituary & Service Information

The family of Garneta J. Bauerle created this Life Tributes page to make it easy to share your memories.

Garneta Junell Bauerle was the oldest of three children born...