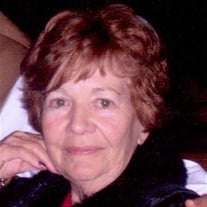 Frances Ann Durham was born October 29, 1929 in the hills of Hazard Kentucky. Frances was adopted by Dr. Franklin Alexander and Kathleen B. Durham and grew up at their home on 1227 Bardstown Road in Louisville, Kentucky. She was baptized as a child and she attended Kentucky Home School for Girls and had fond memories as a lifeguard, trips to the horse farms of Lexington, Kentucky and even getting to sit on the famous stallion, Man o War. Mom and her good friend Clair skipped school one day and went to the Mall and that is when Frances met a handsome soldier and her future Husband, Wayne Alan Davidson. Frances and Wayne were married in Louisville, Kentucky on October 18, 1947 and made a farmhouse Northwest of Lamar, Nebraska their home. They quickly made Thoroughbred Race horses a part of their lives. As a team, Frances loved foaling and caring for the Broodmares and foals and Wayne would do the conditioning and training. As they expanded their farm south of Lamar they also started their family. To this marriage was born three daughters, Nancy, Jane and Linda. The family spent every summer racing their Thoroughbreds at AK-SAR-BEN in Omaha and Centennial Race track in Denver. They were blessed with several successful Race horses. They were most proud of their daughters’ success through Linda’s training and Jane and Mike’s Thoroughbred Foals. In addition to her love for horses, Frances was known as a classy lady with a big heart and a great affection for Elvis. She enjoyed raising flowers, especially roses, cooking for her family and creating a beautiful table and meal for Thanksgiving dinners, decorating her home, interior decorating and visiting with people. Frances knew no stranger and enjoyed volunteering where ever she was needed. Frances was so proud of her Three Grandchildren Brianna, Eric and wife, Lindsay and Blake and wife, Darcy. She treasured visits from her three Great-Grandchildren Hunter, Bennett and new Great-Granddaughter Raegan. Frances went to see Jesus and those that preceded her in death: Daughter; Nancy, parents; Franklin A. and Kathleen B Durham, Wayne A Davidson, and many friends on December 4, 2017. Chapel services and celebration will be held at Liewer Funeral Home in Imperial, Nebraska on December 5, 2017. Memorials have been established to Imperial Manor.

Frances Ann Durham was born October 29, 1929 in the hills of Hazard Kentucky. Frances was adopted by Dr. Franklin Alexander and Kathleen B. Durham and grew up at their home on 1227 Bardstown Road in Louisville, Kentucky. She was baptized as... View Obituary & Service Information

The family of Frances A Davidson created this Life Tributes page to make it easy to share your memories.