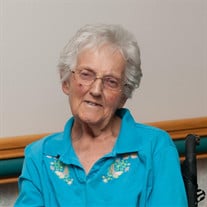 Vivian Fay Rose Barnett was born May 12, 1934 in a country farm house seven miles south of Laird, CO, to Pearl H. and Dorothy Morrell Rose. She passed away on April 7, 2017 in Imperial, NE. Fay started school at the Laird Country School one-half mile north of her home where she was born and raised. She then went to school at Wray where she graduated with the Class of 1951. She married Marion Elbert Barnett on June 28, 1951 at the Methodist Church in Wray, CO. Three children were born to this union. Larry Dean Barnett was born on August 31, 1952 in Wray, CO. Patricia Ann (Barnett) Bryant was born September 26, 1953 in Colby, KS. Cindy Sue was born July 27, 1957 in Wray, CO. For 15 years they lived and worked on the McKinney Ranch, 11 miles north of Laird. Fay drove a school bus from the ranch to the Laird school for nine years. Then in July 1969 after Marion had his first heart attack, they bought a small acreage two miles west of Wray. Fay had several jobs throughout the years. Besides being a wife, mother and helping on the ranch, she worked at the JC Penney Store in Wray where she planned to retire from but the headquarters in New York had closed the store only after a few years. She also cooked at the Renotta Nursing Home and in the kitchen of the Wray Jr. High School. From there she worked Schauer Printing, Gene Cranwell Insurance, USDA-Rural Development, Wray Gazette and for Wray Market. While in Wray, she was a member of the First Presbyterian Church. When she moved to Imperial in 2015 she became a member of Zion Lutheran Church. One of the biggest joys of her life was spending time with her grandkids and great-grandkids! She spent a lot of her retired years chasing grandchildren and always helped out wherever she could. She attended horse shows, fairs, sporting events and other events to watch her grandkids show. She loved doing word searches, embroidery, watching Price is Right and old western movies, reading Louis Lamoure books and attending coffee at the local grocery store. She also enjoyed journaling on a daily calendar up until her arthritis wouldn’t allow it anymore. She loved her time with all her grandchildren dearly. Fay is preceded in death by her parents, Pearl and Dorothy; step-father, Fern Whomble; husband, Marion; her daughter, Patricia Ann. Sister, Martha R DeVries; brother, Morris Rose; sister, Wilma Kimmel; brother, Kenneth Rose; and sister, Barbara Rose. She is survived by her daughter Cindy Barnett Hull and Duane of Laird, CO; son, Larry Barnett of Wray, CO; grandson, Dan Barnett, wife, Kelly and children Calvin and Lillian of Bodega, CA; granddaughter Anne (Barnett) Kelley, husband, Skip and children Porter and Zed of Imperial, NE; grandson Luke Hull of Laird, CO; granddaughter, Tessa (Barnett) Oestman, husband, Eric and children Halle, Kendyl and Knox of Alliance, NE; grandson, Thomas Barnett and wife, Kara of Fort Collins, CO; granddaughter, Sara Barnett of Denver, CO; granddaughter, Lisa Smith and children, Lexi, Avalynn and Val of Gill, CO; and grandson, Samuel Bryant of Vernon, CO. She is also survived by many nieces, nephews, cousins and cherished friends. Memorial services for Fay Barnett will be at 10:00 A.M. (MT), Thursday morning, May 18, 2017 at the Zion Lutheran Church in Imperial with Pastor David Kahle officiating. Inurnment will at 3:00 P.M. (MT), Thursday afternoon, May 18, 2017 in Grandview Cemetery in Wray, Colorado. No visitation; Fay chose cremation. A memorial has been established in Fay’s Memory. Online condolences may be left at liewerfuneralhome.com LIEWER FUNERAL HOME IS ENTRUSTED WITH ARRANGEMENTS

The family of Fay Barnett created this Life Tributes page to make it easy to share your memories.