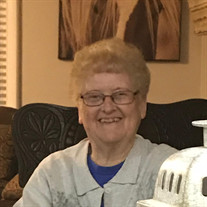 Marjorie Evelyn Rowley was born to Clyde and Irene (Clabaugh) Pursley in Dundy County, Nebraska on February 9, 1938. She attended school in Imperial and graduated high school with the Class of 1955. Evelyn, as everyone knew her, married Darrell A. Rowley in Imperial on February 9, 1959. Evelyn and Darrell continued to live in Imperial where he worked construction and she would work for many years at the Chase County Hospital and the Imperial Manor Nursing Home. The couple would live in Chase County, Nebraska all their married lives. To this union four children were born: Bill, Tom, Darrell Jr. and Peggy. Darrell Sr. passed away in December of 1984. Evelyn continued to work at the hospital and nursing home where she served in the kitchen and as a CNA until health problems forced her to retire. She loved crocheting, putting puzzles together as well as playing board games and cards. It is no coincidence that most of her hobbies included things that she could do with her friends and family; she loved being surrounded by those she loved. Evelyn passed away early, Monday morning, January 21, 2019 at the Sutherland Care Center in Sutherland, Nebraska. She was 80 years of age. She was preceded in death by her parents, husband, infant brother, Leland, brother, Bud Pursley, sisters, Lila and Marseleen and her mother-in-law and father-in-law. Survivors include: Son, Bill Rowley and wife, Lori of Alliance, Nebraska Son, Tom Rowley and wife, Lori of Imperial, Nebraska Son, Darrell Rowley Jr. of North Platte, Nebraska Daughter, Peggy Pracheil and husband, Mike of Dorchester, Nebraska 7 grandchildren & 9 great-grandchildren Sister, Mary Emma Maris of Imperial, Nebraska Brother, John Pursley of Stratton, Nebraska And numerous in-laws, cousins, nieces, nephews and friends. Funeral services for Evelyn Rowley will be Saturday morning, January 26th, 2019; 10:30 A.M. (MT) at Liewer Funeral Home in Imperial. Interment will follow in Mount Hope Cemetery, Imperial. Visitation will be Friday afternoon, January 25th, 2019 from 2:00-6:00 P.M. (MT) at the funeral home in Imperial. Memorials are suggested to Donor’s Choice in Evelyn’s name. Online condolences may be left at liewerfunearlhome.com LIEWER FUNERAL HOME IS ENTRUSTED WITH ARRANGEMENTS

Marjorie Evelyn Rowley was born to Clyde and Irene (Clabaugh) Pursley in Dundy County, Nebraska on February 9, 1938. She attended school in Imperial and graduated high school with the Class of 1955. Evelyn, as everyone knew her, married... View Obituary & Service Information

The family of Evelyn Rowley created this Life Tributes page to make it easy to share your memories.

Marjorie Evelyn Rowley was born to Clyde and Irene (Clabaugh)...