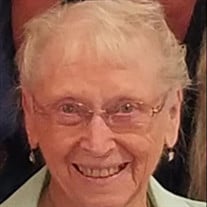 Esther Irene Poe passed away peacefully on August 30, 2020, with her husband and children at her side, at the Imperial Manor in Imperial, NE. She had waged a fierce 6-1/2 year battle with ovarian cancer, but it finally won. Esther was born November 11, 1932 in rural Cheyenne County, Kansas to Roy William and Irene Trembly Douglass. During her early childhood years, her family lived in rural Yuma County, CO, as well as Leadville and Timnath, CO, but most of her childhood was spent on a farm southeast of Holyoke, CO. She attended elementary school at Hilltop School and graduated from Holyoke High School in 1951. She worked as a switchboard operator for the Holyoke Telephone Company for a couple of years before marrying Donald Poe on March 14, 1953. The couple lived in a variety of towns throughout Colorado when Don worked road construction and drove semi-trucks for Harms Bros. out of Fleming, CO. In 1957, Esther and Don took over operation of his family’s farm 12 miles southeast of Holyoke, primarily raising cattle and field crops. Don continued driving trucks for many summers, and Esther and their children Patti and Mike did nearly all of the farming during that time. In addition to all the never-ending work of farm and ranch life, Esther served as room-mother for either Patti’s or Mike’s class throughout their elementary school years and was always available to chaperone school field trips. She was an active member of the Eureka Club for 60 years. She was a 4-H leader, a Phillips County Fair Superintendent in the horticulture exhibits, and a precinct poll worker and election judge for many years. She played women’s softball, coached kids’ softball, and served on the Pleasant Valley Ballpark Board several terms. Esther and Don were active members of Rocky Mountain and Phillips County Farmers Union, and Esther served as Phillips County Farmers Union education leader for 24 years. In about 1972, Esther made the original arrangements for Holyoke school buses to transport Farmers Union kids from northeastern Colorado to the Farmers Union camp in Bailey, CO – a service that continued until the camp closed in the summer of 2019. Esther and Don also were official and unofficial foster parents and a safe refuge for a number of children over the years. Esther was always an excellent cook, she baked and decorated creative and fun birthday cakes for friends and family, and she sewed most of her family’s clothing through the years. She was always a quilter, but starting in her 50s, Esther took her quilting to another level and created innumerable exquisite handmade quilts for friends and neighbors and her children and grandchildren. Her masterpieces earned her an entire wall full of first-place and grand champion ribbons from county fairs and area quilt shows. Several of her quilts have been appraised at over $10,000 each. She also taught quilting lessons and was an active member of the Chase County Quilters Guild. But more important than all of her neighborhood, school and community activities and contributions, Esther was an extremely loving and supportive wife and mother, putting her family first in every way. Preceding her in death were her parents Roy and Irene Douglass, sister; Eunice Douglass Peterson and brothers; James Douglass, Archie Douglass and Carroll Douglass. She is survived by her husband Don Poe and son Mike Poe of Holyoke, daughter Patti Poe and her husband Barry Logan of Chandler, AZ, grandchildren Brian and Holly Logan of Chandler, AZ, sisters Gladys Douglass Walgren of Oregon and Joan Douglass Roskop of Wray, and brother Rex Douglass who lives in Malaysia. A memorial service will be held at a later date. Due to a number of allergies, the family requests no food or flowers and asks instead for memorial donations payable to the Pleasant Valley Cemetery, the Chase County Hospital Foundation, or the Chase County Museum. LIEWER FUNERAL HOME ENTRUSTED WITH ARRANGEMENTS

Esther Irene Poe passed away peacefully on August 30, 2020, with her husband and children at her side, at the Imperial Manor in Imperial, NE. She had waged a fierce 6-1/2 year battle with ovarian cancer, but it finally won. Esther was born... View Obituary & Service Information

The family of Esther Poe created this Life Tributes page to make it easy to share your memories.