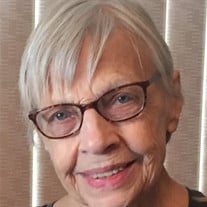 Esther Elizabeth Wennberg was born August 6, 1927, in Lafayette, Colorado, to Gustaf and Ida Weitz Wennberg, both immigrants from Sweden. True to the meaning of her Biblical namesake, Queen Esther, she was a “bright morning star” in the lives of those who knew her--a harbinger of light, optimism, kindness and joy. Like “Stina Lisa,” her alter ego and her father’s nickname for her, she was a child of nature—happiest outdoors and a lover of the wonders of the Earth. Esther graduated at the top of her class at Lafayette High School and was awarded a scholarship to attend the University of Colorado at Boulder. There she studied history, literature and education, and earned her Bachelor’s degree and state teaching certification in 1949. In 1950, Esther married Bertram Stanley Arnison and became stepmother to his daughter, Welcome Melody. Along with Bert’s mother Emily, they moved to Imperial, Nebraska, where Bert worked for the J.C. Penney Company. In 1952, Christine Gay was born, followed by Stephen James in 1954. In 1959, Bert and Esther opened their own small soft goods department store, Arnison’s Fashions and Fabrics, which they operated for over thirty years. In addition to keeping the books for the business, Esther loved interacting with customers and purchasing merchandise. Together the couple was very active in promoting business in Imperial through their work with the Chamber of Commerce and Rotary Club International. Esther was a member of Rainbow Girls and the Order of Eastern Star and also served on the library board. She volunteered many hours on school committees to support the interests and activities of her children and especially liked working with the POMPOMS (Promoters of Music). She loved to sing and was a long-time member of the First United Methodist church choir. She wrote songs and won a song-writing contest while still in high school. Esther was an avid reader and loved to discuss books and ideas. She kept journals and became the family historian and genealogist for both the Wennberg and Arnison families. She also loved to read and write poetry. She saw beauty everywhere, and her writings are full of delight, wonder, gratitude and appreciation for life. She had a keen interest in spiritual matters and a strong faith in God; her church communities in Lafayette, Blanche (where Bert preached for 18 years) and Imperial were all very important to her. Esther also loved to travel. She visited Sweden, England, Germany and the Netherlands. Perhaps her favorite travels, though, were the family camping trips every summer that took them to beautiful places throughout the United States and Canada. More than anything, Esther loved her family. She was happiest when she could spend time with them, and there was nothing that she would not do for them. In May 2017, Esther suffered a broken hip. After surgery and rehab, it became apparent that she could no longer live alone in her home, and her family made the difficult decision to move her to Colorado where she would be closer to her daughter Gay and the beloved mountains of her childhood. She resided at MorningStar Reflections community in Boulder where she quickly won the hearts of her caregivers. On March 20, she had a stroke, and she passed away March 25, at TRU Hospice Community Care Center with her children at her side. Her parents, Gus and Ida Wennberg, sister Thelma, brother Edwin, and husband Bert preceded her in death. Her survivors include daughter Melody Newman and husband Don of Imperial, Nebraska; daughter Gay Waterbury of Niwot, Colorado; and son Stephen Arnison and wife Jane of Clinton, New York; grandchildren: Jennifer Morgan and husband Joel of Richmond, Virginia; Nicholas Newman and wife Kaila of Hadar, Nebraska; Laura Waterbury of San Francisco, California; Annie Waterbury of Portland, Oregon; Thomas Arnison of Chicago, Illinois; and Ellen Arnison of Fairfield, Connecticut; great-grandchildren: Noah Morgan of Ashland, Virginia; Adam Morgan of Richmond, Virginia; and Caleb and Addison Newman of Hadar, Nebraska. Many, many friends—all of whom she considered blessings, also survive her. A celebration of Esther’s life will be held Saturday, April 7, at 10:30 a.m. at the Imperial United Methodist Church. A memorial fund has been established in her name and will support causes close to her heart: nature, children, and support for those in need. Online condolences may be left at liewerfuneralhome.com LIEWER FUNERAL HOME IS ENTRUSTED WITH ARRANGEMENTS

Esther Elizabeth Wennberg was born August 6, 1927, in Lafayette, Colorado, to Gustaf and Ida Weitz Wennberg, both immigrants from Sweden. True to the meaning of her Biblical namesake, Queen Esther, she was a &#8220;bright morning star&#8221;... View Obituary & Service Information

The family of Esther Elizabeth Arnison created this Life Tributes page to make it easy to share your memories.