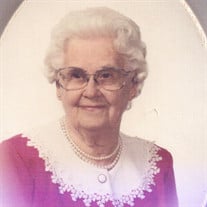 Emma Mae Jones Colson was born April 17, 1908 southwest of Venango, Nebraska in Phillips County, Colorado to Corda and Florence (Case) Jones. She went to her eternal home at the age of 108. When she was one year old, the family moved across the state line in Nebraska and she spent the majority of her life in the Lamar area. Emma attended school in Lamar and CCHS graduating in 1927. She was the last living graduate of that class year. She took Normal Training in high school which allowed her to teach school following graduation. She taught school in the Lamar area until she married Loren Colson, a neighbor boy and classmate, on August 12, 1934. Two children were born to Loren and Emma Mae: Barbara on Nov. 18, 1940 and Robert on Feb. 20, 1945. In 1937, Emma Mae received Jesus Christ as her Lord and Savior and was baptized sometime later. Emma and Loren became members of the EUB church in Lamar and later of the Baptist church in Holyoke, Colorado. She served as a deaconess in the Baptist church. She taught Sunday school for over 50 years and many of her students later remembered her impact on their lives. She was especially gifted in presenting flannel graph lessons. She was very serious about her faith and was a constant prayer warrior for all and prayed that all her family and friends would be in Heaven with her. Mae or Miss Emma (as some called her) enjoyed crocheting, knitting, embroidering, quilting, gardening and helping on the farm in any way she could. She sang at multiple funerals for friends, neighbors and family. Following Loren’s death in 1982, Emma Mae continued to live alone on the family farm with cats and a dog, capably maintaining her home and mowing acres of grass and weeds every summer. She was never idle! She was able to remember details i.e. birthdays, anniversaries until the time of her death. In 1998, Emma Mae moved to Imperial. She became a resident of Imperial Heights and Manor in August, 2006 where she became quite fond and appreciative of the staff and fellow residents. Many eras in history have come and gone since 1908. Emma Mae experienced two world wars, the Korean War, the Vietnam War and the Middle East Crisis. Also the stock market crash in the 20’s, followed by the Great Depression that affected many lives. Life has quickened its pace with huge strides in transportation, communication, space exploration and computer technology. During Emma Mae’s lifetime, nineteen presidents have served from Teddy Roosevelt to Obama. Emma Mae was proceeded in death by her husband, Loren, parents, sister, Verta, brother, Glen, daughter, Barbara and most of her family of that generation. She leaves behind those who loved her: son, Bob (Elaine) of Imperial, NE; grandchildren Mike (Beth) Schuler of Reno, NV; Teak (Becca) Colson of North Platte, NE; Dani (Guy) Gilsdorf of Kearney, NE and Riley Colson of Ft Collins, CO; great grandchildren Andrew, Cody, Gabe, Cassie, Lucas, Tristan, Tasha, Trevor and Brody. Escorts were: Mike Schuler, Teak Colson, Riley Colson, Guy Gilsdorf, Andrew Gilsdorf, Cody Gilsdorf, Gabe Gilsdorf and Lucas Ratliff. Honorary escorts: Larry Colson, Ron Colson, Don Colson, Jim Cranwell, Loren Patterson and all her nephews and nieces. Services will be Thursday morning, September 1, 2016, 10:00 a.m. (MDT) at the Imperial Bible Church with Pastors Joe Stewart and Robby Clay conducting the services, organist Linda Varilek and vocalist Jim Bohlender. Interment will follow at Mount Hope Cemetery in Imperial. Visitation will be Wednesday afternoon, August 31, 2016 from 2:00 – 6:00 p.m. (MDT) at the funeral home in Imperial. Memorials can be made to Emma Mae Colson Memorial Fund. Online condolences can be left at liewerfuneralhome.com LIEWER FUNERAL HOME IS ENTRUSTED WITH ARRANGEMENTS

Emma Mae Jones Colson was born April 17, 1908 southwest of Venango, Nebraska in Phillips County, Colorado to Corda and Florence (Case) Jones. She went to her eternal home at the age of 108. When she was one year old, the family moved across... View Obituary & Service Information

The family of Emma Mae Colson created this Life Tributes page to make it easy to share your memories.