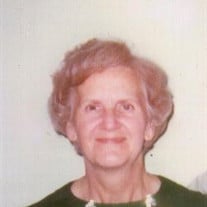 Elsie A Hofman Elsie A Hofman was born on the family farm west of Elwood, Nebraska, on August 11, 1918, the fourth child of Emil and Mary (Marquardt) Gruber. Elsie attended country school and parochial grade school and graduated from Elwood High School. She obtained a normal teaching certificate from Kearney State College and taught in country and parochial grade schools for about 5 years. Elsie married Walter A. Hofman on August 26, 1941, at Salem Lutheran Church southwest of Elwood. Four sons were born to them in Imperial, Nebraska. Elsie became a homemaker for the remainder of her life. She was member of Zion Lutheran ladies Aid of Imperial, and LWML. She was a Sunday School teacher for some forty years. She was a pink lady serving the patients of Chase County Hospital. Elsie also taught VBS and was a den mother. Elsie was a loving and dedicated mother and wife. She and Walter enjoyed playing their guitars. She enjoyed her flowers and vegetable gardening and canned countless jars of fruits and vegetables for her family. She also had a button collection, which included a button from every state and many foreign countries. She and Walter enjoyed many camping trips with their children. Elsie instilled a love for reading in their children by reading to them daily. Elsie passed away peacefully into the arms of Jesus on Thursday evening, April 16th, 2015, at the Imperial Manor Nursing Home in Imperial, Nebraska. She was 96 years of age. She was preceded in death by her husband, Walter, in 2009, a grandson, Brad, and her three brothers. Elsie is survived by her four sons: Kenneth Hofman and wife, Sharon, of Bellevue, Nebraska; Glenn Hofman and wife, Carol, of Elwood, Nebraska; Donnie Hofman and wife, Amy, of Land Harbor Newland, North Carolina and Stanley Hofman of Champion, Nebraska.18 Grandchildren, 28 Great-grandchildren and a host of other family and friends. Funeral services were held 10:30 A.M. (MT) Monday, April 20th, 2015 at Zion Lutheran Church in Imperial with Pastor David Kahle officiating. Interment will follow at Mount Hope Cemetery in Imperial. Organ selections by Dr. J. Gordon Christensen, and vocal choir led by Joel Grosbach. Visitation will be Sunday afternoon, April 19th, 2015, 5:00-7:00 P.M. (MT) at the funeral home in Imperial. A memorial has been established to The Lutheran Hour. Online condolences can be left at liewerfuneralhome.com LIEWER FUNERAL HOME ENTRUSTED WITH ARRANGEMENTS

Elsie A Hofman Elsie A Hofman was born on the family farm west of Elwood, Nebraska, on August 11, 1918, the fourth child of Emil and Mary (Marquardt) Gruber. Elsie attended country school and parochial grade school and graduated from... View Obituary & Service Information

The family of Elsie Hofman created this Life Tributes page to make it easy to share your memories.