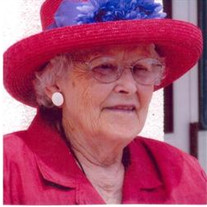 ELNOR VIOLA (MUNSON) BROWN - MAY 23, 2015 Elnor Viola (Munson) Brown was born August 24, 1923 to Amil and Maude (Terry) Munson at her Grandma Anna Terry’s house in Wauneta, Nebraska. Elnor was raised on their farm south of Champion with her sister Amilene (Munson) Spotts. She loved to be outside with all the farm animals. She went to a one-room country grade school close to home. After graduating from Chase County High School in 1942, Elnor attended nursing school in Omaha for a short time and worked as a practical nurse at Chase County Hospital. During World War II, she was a “Rosie the Riveter” on the fuselage of B-14s and B-27s at Northrup Aircraft in Hawthorne, California. On August 24, 1944 she married Bernard Wayne Brown in Augusta, Georgia before he was sent to war in Germany. To this union were born three children: Susan, Michael and Mary Ann. After Wayne returned in late 1945, they farmed on the South Divide until the early 1960’s when they moved to Imperial. Elnor was the Librarian at Imperial Public Library for 28 years. She retired as the Library Director in 1995. Books were her passion. She was very dedicated, working long hours. With an inquisitive mind she was always doing research for patrons, including research on many books for local author Wayne Lee. She always had notes of various things to look up when she went back to the Library for someone. She finally got to read lots of books after she retired. Elnor had many outside interests through the years including: Extension Club, Champion Historical Society, TOPS and the Red Hat Society. She was on the Imperial Senior Center Board and the Library Foundation Board. She liked to cook, bake, garden, do handicrafts, sew and to draw. She took art classes and appreciated fine art work and sculptures. She enjoyed having her family come and visit. She had a special relationship with all her grandchildren. She moved into Parkview Heights Assisted Living in 2007 and enjoyed playing dominos, Bingo, visiting with old classmates and friends in the coffee area where you could catch her reading. She was later transferred to the Imperial Manor Nursing Home where she received excellent and loving care. Elnor Brown went to be with her Lord May 23, 2015 at the Imperial Manor. She was 91years of age. Faith was an important part of her life. She had accepted the Lord as her Savior in baptism and was a long time member of the Westside Church of Christ. Elnor was preceded in death by her husband Wayne in 1976, daughter Mary Ann (Brown) Pump in 1996 and her parents. Elnor is survived by her daughter Susan (Lyle) Kramer of Highlands Ranch, CO, her son Michael (Jeanie) Brown of Huntington Beach, CA; grandchildren Michelle and Tammie Brown, Stephanie (Chris) Beddo, Paula (Terry) Seals, Sarah (Bryan) Falk, William (Kristin) Pump; 10 great-grandchildren; 4 great-great-grandchildren and her sister Amilene Spotts of Mesa, AZ. Services will be held in Imperial on Friday, May 29th at 10:30 a.m. at the Westside Church of Christ with Randy Hayes and Bill Bryant officiating. Interment will follow at Mount Hope Cemetery, Imperial. Visitation will be held Thursday afternoon, May 28th, 2015, 2-6:00 P.M. at the funeral home in Imperial. In honor of her love of books, a memorial has been established at The Lied’s Imperial Public Library, P. O. Box 728, Imperial, NE 69033. Online condolences can be left at liewerfuneralhome.com LIEWER FUNERAL HOME ENTRUSTED WITH ARRANGEMENTS

The family of Elnor Brown created this Life Tributes page to make it easy to share your memories.