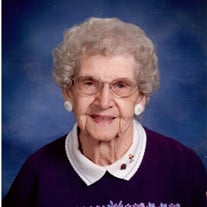 Elna Rae Kitt West, the daughter of Ray Nicholas and Hilda Marie (Seward) Kitt, was born on July 4, 1925 at the homestead of her grandfather Seward south of Wauneta NE. She grew up in the Wauneta area where she attended District 40 and graduated from Wauneta High School in 1943. She attended Kearney State College for 1 year, then taught school for 2 years. Elna Rae married Vilas Smith on June 15, 1946 at her farm home south of Wauneta. They made their home on a farm north of Enders NE. To this union, four children were born, Lloyd Allan, Marla Rae, Merle Ann and Maxine Faye. On April 11, 1968, Elna Rae married Robert A West. They moved to York, NE in June of 1969 and made their home there for 32 years. Elna Rae returned to her roots in Chase County, residing in Imperial at the time of her death. Elna Rae passed away at the Chase County Community Hospital on July 28, 2016 after a short illness. Elna Rae was preceded in death by her parents, an infant sister, four brothers and a granddaughter, Veneta Smith, and Robert West. She is survived by her son, Lloyd (Rhonda) Smith of Champion; daughters, Marla Smith of Imperial, Merle (Larry) Konken of Hershey, Maxine Smith of Cheyenne, WY. Also surviving are 5 grandchildren: Nicholas Smith, Brent Smith, Kyle Konken, Caleb Smith, Sarah Smith and 14 great grandchildren, and a host of relatives and friends. Elna Rae grew up in the Mount Zion Methodist Church on the south divide and was a 75+ year member of the United Methodist Church. Elna Rae was a member of various church circles and the Rebecca Lodge of York NE, in which she served as a lodge musician and served in all of the offices. She was instrumental in starting the POM POMS (Parents of Muscians Promoters of Music) group at the Chase County Schools, serving as its first President. Elna Rae was a devoted mother and grandmother and especially enjoyed time with her family. Her hobbies included cooking, embroidery and crocheting. But her first love was music and playing the piano, which she was able to do up until she became ill. She could play either by “ear” or reading music. She passed her love of music along to her four children and grandchildren. She enjoyed playing the clavinova and card games with all her friends at the Imperial Heights, where she resided at the time of her death and daily shared her philosophy of life: BE HAPPY! Funeral services will be held on Monday, August 1, 2016 at the United Methodist Church in Imperial. Flower service will be held at 9:00 AM, funeral at 10:00 AM with burial at the Riverside Cemetery in Wauneta NE. Pastor Dirk Weiss officiating. Pallbearers are Nicholas Smith, Brent Smith, Kyle Konken, Caleb Smith, Allan Smith, Zachary Smith and Larry Kitt. Honorary pallbearers are the fourteen great grandchildren. Memorials have been established at Rainbow Promise Preschool, Chase County Community Hospital and the Imperial United Methodist Church. LIEWER FUNERAL HOME ENTRUSTED WITH ARRANGEMENTS

Elna Rae Kitt West, the daughter of Ray Nicholas and Hilda Marie (Seward) Kitt, was born on July 4, 1925 at the homestead of her grandfather Seward south of Wauneta NE. She grew up in the Wauneta area where she attended District 40 and graduated... View Obituary & Service Information

The family of Elna Rae (Kitt) West created this Life Tributes page to make it easy to share your memories.