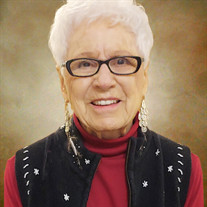 ELIZABETHE I. CREVELING Elizabethe Irene Creveling was born August 18, 1932, in Parks, Nebraska, to Charles K. and Margaret I. (Pugh) Leach. As a young lady, Liz (as she was known), attended country grade school, graduating from Chase County High School in 1949. On October 2, 1949, she married Arthur Harry Creveling in Imperial, and to this union two children were born, Cynthia and Richard (Dick). Liz and Art settled in Imperial, where Liz was employed as a secretary for the Plains Oil Company. She was also involved in irrigated farming with Art and family. Liz then became a part of Creveling Construction completing the finish work and painting. Liz and Art purchased the Luhrs and Reynolds Funeral Home of Imperial, Nebraska, in 1968, and later the Brunkhorst Funeral Home in 1976. They owned and operated the local funeral homes until 1992. The couple remained in Imperial until moving to Lexington, Nebraska, to be near daughter, Cynthia. The couple again made Imperial their home in 2012. Art passed away in 2015, and Liz remained in Imperial until moving to Lincoln, Nebraska, in 2016. Liz was a member of the United Methodist Church of Imperial, Nebraska, and the United Methodist Women Miriam Circle. She was also a member of the Freedoms Foundation of Imperial. She enjoyed sewing, reading, music, art, walking, church activities, and traveling. Liz also loved spending time with family and close friends. Liz passed away Thursday evening, December 6th, 2018, at the Clark-Jeary Retirement Center in Lincoln. She was 86 years of age. Liz was preceded in death by her parents, Charlie and Margaret (Johnnie) Leach, husband, Art in 2015, son, Richard (Dick) Creveling in 1986, brothers, Dick and Tommy Leach. Survivors Include: Daughter: Cynthia (Cyn) Norman and husband, Don, of Lexington, Nebraska. Grandsons: Donivan Norman and husband, Nic, of Lincoln, Nebraska Adam (Creveling) Johnson, of Denver, Colorado Sisters: Janette Rivers, of Imperial, Nebraska Joanne Grantham, Greeley, Colorado Brother: Don Leach of Hobbs, New Mexico Sisters-In-Law: Deanie Leach of Texas LaDonna Williams of Arizona And numerous nieces and nephews Funeral Services will be announced at a later date. Online condolences may be left at liewerfuneralhome.com LIEWER FUNERAL HOME OF IMPERIAL ENTRUSTED WITH ARRANGEMENTS

The family of Elizabethe I. Creveling created this Life Tributes page to make it easy to share your memories.