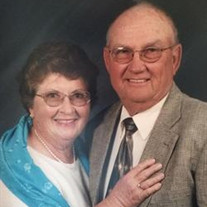 Elizabeth “Betty” Parman Elizabeth Ann (Jones) Parman went home to be with her Lord on August 25, 2015 after losing her three year-long battle with cancer. Betty was born on September 18, 1934 to Miles and Gertrude (Connor) Jones in McCook, Nebraska. She attended school and high school in Benkelman and graduated with the class of 1953. In her senior year of high school, Floyd Parman proposed to her and she said yes. She attended McCook College and graduated with her teaching degree, all the while waiting for Floyd to come home to her from the Army. They married on May 30, 1954 and made their home on the farm north of Benkelman where she lived out the rest of her years. Betty taught school for two years at the Hoover Country School until having their sons, Richard Floyd and James Stephen. She loved children and would sit and read books to her kids, grandkids and any child who wanted read to. Betty worked hard beside her husband making a home for their family. She was the “got to” person when help was needed. She did everything from scooping out the hog pens to driving the grain cart. When the guys corrected her grain cart driving abilities, she would just shut the two way radio off! Betty was a member of the Presbyterian Church, the PEO, Job’s Daughters, Eastern Star and Garden Club. She usually won the purple ribbon at the fair with her flower arrangements. She taught Sunday school for many years as a faithful servant of the Lord. She was very strong in her faith, and was a faithful wife and a wonderful loving mother. Preceding her in death were her parents Miles and Gertrude Jones, step-mother, Vi Jones, one brother, Mason Jones, two sisters, Roberta Powell and Ethel Christner. She is survived by her loyal and loving husband of 61 years, Floyd Parman of Benkelman; sons, Richard Parman and wife, Wanda of Benkelman and James Parman and wife, Deborah of Grand Junction, CO; sister, Millie Glasco of Bird City, KS; brother, Tom Jones and wife, Sharlane of Benkelman; 7 grandchildren, 11 great-grandchildren & 1 great-great-granddaughter Memorial services will be 2:00 P.M. (MT), Saturday, August 29, 2015 at the United Methodist Church in Benkelman with Pastor Sheila Taylor officiating. A private family inurnment will take place at a later date. No visitation; Betty chose to be cremated. A Memorial has been established in Betty’s Memory. Online condolences can be left at liewerfuneralhome.com BENKELMAN MEMORIAL CHAPEL ENTRUSTED WITH ARRANGEMENTS

Elizabeth &#8220;Betty&#8221; Parman Elizabeth Ann (Jones) Parman went home to be with her Lord on August 25, 2015 after losing her three year-long battle with cancer. Betty was born on September 18, 1934 to Miles and Gertrude (Connor)... View Obituary & Service Information

The family of Elizabeth "Betty" Parman created this Life Tributes page to make it easy to share your memories.