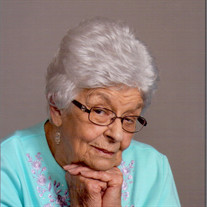 Elizabeth "Betty" Sis Elizabeth (Betty) Ann Sis of Benkelman, died at the age of 81 at the Dundy County Hospital on February 5, 2018 after a short battle with COPD and influenza. Betty was born in Benkelman, Nebraska on May 10, 1936 to Leonard Tobias and Iva Daniella (O’Neal) Keim. Betty graduated from Benkelman High School with the class of 1953. Betty met the love of her life, Jimmy Dean Sis, at a softball game while in high school. They were married on May 25, 1953 at St. Joseph’s Catholic Church in Benkelman, NE. They lived South of Max and started their family. It wasn’t long and they had seven young children. Betty was raised an only child and she wanted a large family so their kids had someone to play with. Betty was an excellent cook and homemaker and many Sis memories were made around the kitchen table. Her recipes will continue to be passed down for generations to come. Betty enjoyed gardening and raising her family. She took great pride in all of her children and always put them first. Betty also spent time as a substitute post master at the Max post office and on the Max election board. Jim and Betty purchased a home in Max in 1976. After retiring from the farm in 1998, she and Jim managed the Circle B Motor Lodge for their youngest son, Shane and his wife, Nickole. When the Circle B sold in 2010, Betty moved and was able to retire and relax. She could often be seen driving around town, waiving at everyone she met. Betty was frequently seen dining out at The Dub or The Hangout. Betty didn’t know a stranger. Her faith in God remained strong even in her last days. Betty is survived by her children, Vicki (Barry) Hogg of Colorado Springs, CO. Kristine (Scott) VanWinkle of Chappell, NE. Cindy (Rick) Einspahr of Wauneta, NE. Stephanie (Randy) Williams and Shane (Nickole) Sis both residing in Benkelman, NE. She is also survived by her daughter in law Michelle Sis of Council Bluffs, IA, brother and sister in laws, Ron and Donna Sis of McCook and Joyce Sis of North Platte, NE, as well as a host of nieces, nephews and friends. Betty was blessed with 17 grandchildren Travis (Veronica) Garretson, Misty (Jeff) Garmin, Lucas (Kelli, VanWinkle, Nick (Julie) VanWinkle, Lance (Nichole) VanWinkle, Jordan (Rebekah) VanWinkle, Cole VanWinkle, Kelsie (BJ) Davis, Jennifer (Brad) Jenny, Rogan (Ashley) Einspahr, Kayla (Adam) Landerfield, Jared Stroberg, Mallory (Bill) Sabah, Sydney Williams (Kenny Giron), Olivia and Dominic Sis. Betty was also survived by 21 great grandchildren, Brooke (Dustin) Garretson-Bonhert, Jymon Garretson, Isaac Peck, Corinne and James VanWinkle, Joseph, Ian and Neala VanWinkle, Carter and Isabelle VanWinkle, Willa Davis, Miles and Pacen Jenny, Addalyn, Riley and Axel Einspahr, Carter and Bode Landerfield, Maggie Sabah, Kora and Zella Giron. Betty loved spending time with her family. Betty is also survived by her cat, Sneezy. Betty was preceded in death by her parents Leonard and Iva Keim, her husband of 47 years, Jimmy Dean Sis in 2001. Her oldest son, Steven in 1983, Son, Kevin in 2011. Infant grandson Cody Sis. Father in law, James J Sis, mother in law, Georgia Sis and brother in law Dennis Sis. A Funeral Mass will be held Saturday morning, February 17th, 2018, 11:00 A.M. (Mountain Time) at St. Joseph’s Catholic Church, Benkelman, Nebraska, with Fr. Matthew Eickhoff celebrating. Inurnment will follow at the Benkelman Cemetery, Benkelman, Nebraska. A Rosary will be recited Saturday morning, February 17, 2018, before services starting at 10:00 A.M. (Mountain Time). The family has requested that memorials mat be left to the St. Joseph’s Catholic Alter Society or the Dundy County Senior Center. On line condolences may be left at liewerfuneralhome.com BENKELMAN MEMORIAL CHAPEL ENTRUSTED WITH ARRANGEMENTS

Elizabeth "Betty" Sis Elizabeth (Betty) Ann Sis of Benkelman, died at the age of 81 at the Dundy County Hospital on February 5, 2018 after a short battle with COPD and influenza. Betty was born in Benkelman, Nebraska on May 10, 1936 to Leonard... View Obituary & Service Information

The family of Elizabeth "Betty" A Sis created this Life Tributes page to make it easy to share your memories.