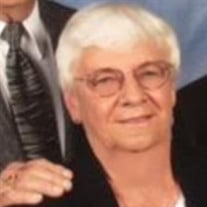 Elinor Elizabeth (Engel) Denker was born September 9, 1925, to Adolf and Mina (Siegel) Engel. Elinor grew up in the rural community of Wauneta, Nebraska, where she attended grade school and graduated from Wauneta High School in 1942. She continued her education attending business school in Denver, Colorado, and worked there for a year upon graduating. Elinor returned to Wauneta and on February 2, 1947, she married Lavern W. Denker. They lived on a farm south of Wauneta, where she assisted Lavern with his farming. Lavern retired from farming in 1992, and the couple, along with their son, Lynn, made Wauneta their home. Because of health issues, Elinor spent the final years of her life at the Wauneta Care and Therapy Center, where she was taken care of by the loving staff who work there. Elinor was a dedicated wife and mother. She joined St. Paul Lutheran Church after her marriage to Lavern. She was an active member in the church, teaching Sunday school and Bible school, singing in the choir, and serving in various other capacities. Elinor was also an active member of the Women’s group at church. She was involved in the Wauneta community as well, serving as a member of the Wauneta American Legion Auxiliary. Elinor loved to sew and knit, sharing those talents. She was an avid reader and was always willing to lend a helping hand to those in need. Elinor passed away, Wednesday night, December 22, 2021. She was 96 years of age. Elinor is survived by her children: daughter, Pat Polly of Lincoln, NE. sons, Terry and Lynn Denker of Wauneta, NE. Grandchildren: Anne (Rolf) Hovey of Bruce, SD., Stephanie Hand of Omaha, NE, Michael Denker of Bruce, SD, and Ben (Tara) Polly of Ft. Collins, CO. 5 Great-Grandchildren Elinor was preceded in death by her parents, husband; Lavern, great-grandson; Kyle Denker, sisters; Emma (Homer) Hoff, and Irma (Ernest) Propps, Niece; Ann Prior, and brother and sister-in-law; Richard and Lois Greeley. Memorial services will be held at a later date. A memorial, in Elinor’s memory, has been suggested to the Denker Family for a future designation. On line condolences may be left at liwerfuneralhome.com LIEWER FUNERAL HOME OF WAUNETA ENTRUSTED WTH ARRANGEMENTS

Elinor Elizabeth (Engel) Denker was born September 9, 1925, to Adolf and Mina (Siegel) Engel. Elinor grew up in the rural community of Wauneta, Nebraska, where she attended grade school and graduated from Wauneta High School in 1942. She continued... View Obituary & Service Information

The family of Elinor E Denker created this Life Tributes page to make it easy to share your memories.