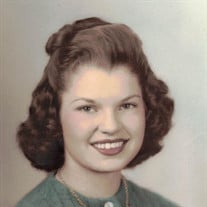 Elfrieda Johnston Elfrieda D. Johnston was born September 3, 1925, to Fred and Dora (Steinbeck) Nordhausen at the family home in Dundy County, Nebraska. Elfrieda was raised on the family farm, in the German-American community located on the tableland south of Wauneta, Nebraska. As a child she attended a one-room country school, and she completed her formal education at Wauneta High School, graduating in the class of 1943. During World War II, Elfrieda lived for a time in New York City, and worked for members of her extended family who owned a business there. Upon her return to Wauneta and at War’s end she married her lifelong love and partner, Jim Johnston, on December 1, 1945. The couple had three sons; Page, John and Joe. Elfrieda spent most of her life with Jim and the boys in Wauneta, as a wife and mother, and was a paragon of 20th century American homemaker. She enjoyed taking part in a variety of community activities- teaching Sunday school in the Methodist church in her early years, attending school events while her sons were growing up, and thrilling to the arrival of grandchildren and great-grandchildren in her later years. Elfrieda had a warm and friendly nature, and ready smile which she shared with everyone. She was an inspiration to those close to her, facing life’s trials with great courage and sustained by an abiding faith in her Lord and Savior, Jesus Christ. She will be greatly missed by a large family and many friends. Elfrieda passed away early Monday morning, December 2, 2019, at the Wauneta Care and Therapy Center. She 94 years of age. Survivors Include: Sons: Page, John, and Joe Johnston all of Wauneta, NE 4 Grandchildren Amanda Pankonin and husband, Jacob, of Wauneta, NE; Emily Cahow and husband, Sam, of Benkelman, NE Alex Johnston, of Lincoln, NE and Joshua Johnston, of Grant, NE 4 Great-Grandchildren: Ellany, Karalyn, and Gideon Pankonin of Wauneta, NE; Henry Cahow of Benkelman, NE Sister: Viola Krausnick of Wauneta, NE Elfrieda was preceded in death by her parents; husband; Jim, brothers; Alvin Nordhausen, Otto Nordhausen, Edgar Nordhausen, Floyd Nordhausen, and Gilbert Nordhausen, sister; Gladys Schneider A private family graveside inurnment service will be held at Riverside Cemetery, Wauneta, Nebraska, with Rev. Elias Munkindia officiating, occurring at a later date. A memorial has been suggested to Mercy Meals of Southwest Nebraska. On line condolences may be left at liewerfuneralhome.com LIEWER FUNERAL HOME OF WAUNETA ENTRUSTED WITH ARRANGEMENTS

Elfrieda Johnston Elfrieda D. Johnston was born September 3, 1925, to Fred and Dora (Steinbeck) Nordhausen at the family home in Dundy County, Nebraska. Elfrieda was raised on the family farm, in the German-American community located on the... View Obituary & Service Information

The family of Elfrieda D Johnston created this Life Tributes page to make it easy to share your memories.