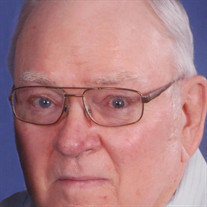 Edward Eugene Felt was born to Glen and Viola (Deselms) Felt on December 13, 1941, in McCook, Nebraska. He was the second of three brothers. After his mother died when he was three, Ed was raised by his grandparents, James and Cora Felt, in Culbertson, Nebraska. Ed joined the Air Force in 1961. He was stationed in Mississippi, the Philippines, Japan, Thailand and Vietnam. A month before he was to be sent to England, he was wounded in Vietnam, in March of 1968 for which he received a Purple Heart and a Bronze Star. Ed was hospitalized in DaNang and Guam prior to being transferred to Fitzsimons Hospital in Aurora, Colorado. He was a resident there for 18 months with 9 surgeries. Ed married Janet (Brinkmann) Brannan in Yuma, Colorado, on June 5, 1971 and became the father to Gordon and Gale Brannan. The family moved to Aurora, Colorado, as Ed was still in electronics school where he became a registered electronics technician. They then moved to Stratton to be nearer his brother Roger. Ed was a life member of the VFW and an Elks member. He loved to fish, was a NASCAR fan, a pencil collector with well over 5000 pencils with advertising and a Nebraska football fan. Ed had a great sense of humor. He loved to tell believable stories with a straight face and smile or laugh when he revealed that the story wasn’t true. He told people he worked for Sitmore and Dolittle. Ed passed away Monday morning, July 20, 2020, at Benkelman, Nebraska. He was 78 years of age. Ed was preceded in death by his grandparents and parents, both step-children Gordon and Gale Brannan, and brothers Walter and Roger Felt. Survivors include: Wife of 49 years: Janet of Stratton, Nebraska. Sisters-in-law: Teresa Felt, Barbara Felt, Caralynn Appenzeller and husband Dan. Many nieces, nephews and friends. Funeral Services will be held Saturday afternoon, August 8th, 2020, 2:00 P.M. (Central Time) at the United Methodist Church of Stratton with Pastor Rod Heilbrun officiating. Inurnment will follow at Rose Hill Cemetery, Stratton. A memorial has been suggested to the Felt Family for a future designation. On line condolences may be left a Liewer Funeral Home. Com BENKELMAN MEMORIAL CHAPEL ENTRUSTED WITH ARRANGEMENTS

Edward Eugene Felt was born to Glen and Viola (Deselms) Felt on December 13, 1941, in McCook, Nebraska. He was the second of three brothers. After his mother died when he was three, Ed was raised by his grandparents, James and Cora Felt, in... View Obituary & Service Information

The family of Edward Felt created this Life Tributes page to make it easy to share your memories.