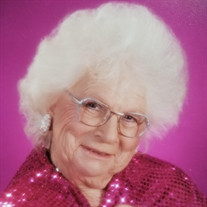 Edna Helen Parrish was born to Theo and Ruth (Bright) Daschofsky on June 24, 1917 in Lamont, Nebraska in southwest Chase County. She attended school through the eighth grade. On November 13, 1943 she was united in marriage to Harold C. Parrish. The couple first lived in South Carolina while Harold served in the Army and then returned to live southwest of Champion, Nebraska. Edna operated Parrish’s second hand store and raised over 1,000 turkeys to buy the couple’s first house in Imperial, Nebraska. She also ran two concession stands at the Chase County Fair for four years. She was a lifetime member of the V.F.W. Post # 4688 Auxiliary, the Friendship Club of Imperial and served on the Flag raising Committee for Memorial Day at Mount Hope Cemetery in Imperial. She enjoyed sewing and making quilts, playing Bingo and pitch, fishing and gardening. Edna was also very proud of her salt and pepper shaker collection; she accumulated over 1,500 pairs in her life. Edna Parrish passed away Saturday morning, March 31, 2018 at the Imperial Manor Nursing Home in Imperial. She was 100 years of age. She was preceded in death by her parents; husband, Harold; daughter, Betty Jean Parrish and sister, Elzada Doughrty. Survivors include: Son, Duane Parrish of Bennet, Nebraska 3 granddaughters: Felicia Dawn Nichelson and husband, Travis of Bennet, Nebraska; Jennifer Rose Ernest and husband, Will of Bennet, Nebraska and Angie May Nelson and husband, Trey of Bennet, Nebraska 5 great-grandsons: Cody Nichelson, Weston and Rhett Ernest, and Glen and Kade Nelson. Sister, Ruby Grant of Orange, California Funeral services for Edna Parrish will be at 10:00 a.m. (MT), Thursday morning, April 5, 2018 at Zion Lutheran Church in Imperial with Pastor David Kahle officiating. Interment will follow at Mount Hope Cemetery in Imperial. Visitation will take place prior to services; the same day as services, at the church in Imperial. Memorials have been established to the Zion Lutheran Church in Imperial, the V.F.W. in Imperial and to the Champion Mill in Champion. Online condolences may be left at liewerfuneralhome.com LIEWER FUNERAL HOME IS ENTRUSTED WITH ARRANGEMENTS

Edna Helen Parrish was born to Theo and Ruth (Bright) Daschofsky on June 24, 1917 in Lamont, Nebraska in southwest Chase County. She attended school through the eighth grade. On November 13, 1943 she was united in marriage to Harold C. Parrish.... View Obituary & Service Information

The family of Edna Helen Parrish created this Life Tributes page to make it easy to share your memories.