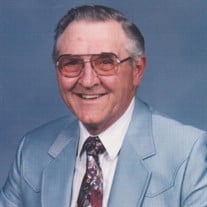 Earl Benton Erdman was born on Oct. 28, 1927 to Ernest Martin and Blanche Orene (Stamper) Erdman in Dundy County, Nebraska. He was raised on the ranch 20 miles north of Haigler. He attended Rural School District #77 for five years. For the 6th grade, he rode horseback five miles north to the Williams School District #46 because he was the only student in District #77. The 7th and 8th grades were completed at the Lutheran Parochial school at Amherst, Colorado, where he was baptised and confirmed. He went to high school at the Nebraska School of Agriculture at Curtis, Nebraska and graduated with the class of ‘46. In Sept of ‘46 he joined the Navy and served aboard the aircraft carrier USS Princeton. Earl was a Veteran of World War II and the Korean War. He was honorably discharged in September of 1951. He then returned home to help on the ranch. He met Ilene Osborn and they were married on March 15, 1953 in the Benkelman Lutheran Church by Pastor Rossback. They lived north of Haigler on the ranch which he and his brother, Dean, took over a year later, due to his father’s failing health. This is where their three daughters, Kathy Orene, Cindy Lee, and Nancy Ilene were raised. Earl was always active in community affairs. He supported the youth of Dundy County by serving as a 4-H leader, county extension board member, and Dundy County Fair Board member for 16 years. Earl was elected to both the rural and Haigler school board. He actively served on the Haigler American Legion for over 60 years, the Haigler Lutheran Church council for 18 years and two terms as Dundy County Commissioner. Earl, Ilene, and family loved to travel, and were fortunate enough to go on several memorable trips together. In later years, Earl and Ilene went on several tours, and were able to visit 44 of the 50 states together. Earl’s hobbies were softball in his younger years, bowling, golf, restoring old cars and woodworking. He was a devoted husband, father, grandfather and great-grandfather. The true loves of his life were his wife, family, friends, the ranch and good Herford cattle. Earl Erdman passed away Thursday morning, February 23, 2017 at the Dundy County Hospital in Benkelman. He was 89 years of age. Survivors include: Wife, Ilene Erdman of Haigler, Nebraska Daughter, Kathy Blecha and husband, Mike of Haigler, Nebraska Daughter, Cindy Haskell and husband, Keith of Haigler, Nebraska Daughter, Nancy Akert and husband, JR of Kingsville, Missouri 8 Grandchildren & 16 Great-Grandchildren Brother, Paul Erdman of Benkelman, Nebraska Brother, Dean Erdman and wife, Esther of Haigler, Nebraska Sister, Mae Wilkens and husband, Art of Stockville, Kansas Memorial services will be 2:00 P.M. (MT), Friday afternoon, March 3, 2017 at Zion Lutheran Church in Benkelman with Pastor Doug Hjelmstad officiating. Inurnment will immediately follow services at Haigler Cemetery in Haigler, Nebraska with full Military Honors. No visitation; Earl chose cremation. A memorial has been established to the Haigler, Nebraska American Legion Post. Online condolences may be left at liewerfuneralhome.com BENKELMAN MEMORIAL CHAPEL IS ENTRUSTED WITH ARRANGEMENTS

Earl Benton Erdman was born on Oct. 28, 1927 to Ernest Martin and Blanche Orene (Stamper) Erdman in Dundy County, Nebraska. He was raised on the ranch 20 miles north of Haigler. He attended Rural School District #77 for five years. For the... View Obituary & Service Information

The family of Earl B. Erdman created this Life Tributes page to make it easy to share your memories.