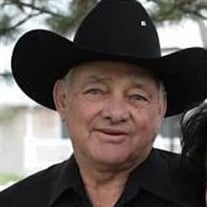 Duane Eldon Wilson was born to Kermit and Martha (Gobel) Wilson on July 13, 1941 in Alliance, Nebraska. The Wilson family moved to a ranch north of Parks, Nebraska in 1946 where Duane worked at Cresent Bar Ranch. He graduated from Parks High School and furthered his education at McCook Community College, receiving his Associates Degree. Duane served his county in the United States Army from January of 1964 until October of 1965 when he was honorably discharged as a Specialist. In 1966, Duane and his brother, Nason formed Wilson Bros. Angus, raising and selling Registered Black Angus Cattle. On April 24, 1976 he married Colleen Faye Skipworth at the First Christian Church in Holyoke, Colorado. The couple made their home on the ranch 2 miles north of Parks, where they would live for more than 40 years. After his brother retired in 2007, Duane and Colleen continued the ranching lifestyle under DEW Drop Angus. After a final sale in 2012, he hung up his hat in the cattle business. He then designed and built a western cabin for overnight lodging, the DEW Drop Inn and also began driving for the Dundy County School District. Duane was a member of the American Angus Association. He and Colleen were members of the Friends Church of Benkelman, which he helped build. When the Friends Church closed they joined the Church of the Nazarene in Wray, Colorado. Duane’s devotion to his Lord led him to be a Sunday School Superintendent, adult bible class teacher, and a board member of the Imperial Valley Holiness Camp Association. He and Colleen directed numerous Christian programs for which Duane built props, backgrounds and stage boxes. Duane farmed and raised hogs and sheep in addition to his Angus Cattle. His hobbies included his daily devotion and bible reading, restoring old cars and cheering on his grandkids during football, basketball, swimming, golf and track. Duane Wilson passed away Tuesday morning, December 27, 2016 at the Dundy County Hospital in Benkelman. He was 75 years of age. He was preceded in death by his parents and brother, Nason Wilson. Survivors include: His wife of over 40 years, Colleen Wilson of Parks, Nebraska Daughter, JaNan Cooper and husband, Greg of St. Francis, Kansas Son, Jason Wilson of Moses Lake, Washington Son, David Wilson of Padre Island, Texas Daughter, Davina Sanford and husband, Brandon of Benkelman, Nebraska 6 grandchildren: Gavin Cooper, Gaten Cooper, FayeLee Sanford, Phalen Sanford, Hailey Wilson and Garin Cooper Sister, Sharlane Jones and husband, Tom of Benkelman, Nebraska Sister, Bonny Smith and husband, Jim of Arvada, Colorado Sister-in-law, Marjorie Wilson of Lincoln, Nebraska Funeral services will be 2:00 P.M. (MT), Saturday afternoon, December 31, 2016 at the Benkelman Community Building in Benkelman, Nebraska with Pastor Don Smith officiating. Interment will follow at Benkelman Cemetery with full Military Honors. Visitation will be held prior to services, the same day as services at the Community Building in Benkelman. A memorial has been established in Duane’s memory. Online condolences can be left at liewerfuneralhome.com BENKELMAN MEMORIAL CHAPEL IS ENTRUSTED WITH ARRANGEMENTS

Duane Eldon Wilson was born to Kermit and Martha (Gobel) Wilson on July 13, 1941 in Alliance, Nebraska. The Wilson family moved to a ranch north of Parks, Nebraska in 1946 where Duane worked at Cresent Bar Ranch. He graduated from Parks High... View Obituary & Service Information

The family of Duane Eldon Wilson created this Life Tributes page to make it easy to share your memories.