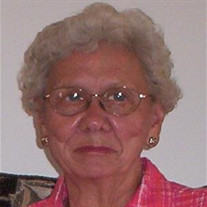 .Doris Lorene (Anderson) Ough was born on August 25, 1924 in Minden, Nebraska to her parents, Elmer C. Anderson and Effie Lenora Munson. Doris was called home to heaven after 93 years, 10 months and 22 days on July 17, 2018 (in Elkhorn NE). Doris married Lloyd Wilson Ough, Jr, in December 1946. To this union three sons were born: Michael, William and Rodney. Doris lived on the Ough family farm (1 mile east of Wauneta) for nearly 64 years before moving to Elkhorn, Nebraska to be near her son Michael and other family members. During her life in Wauneta, Nebraska, Doris was a high school teacher of chemistry, physics, mathematics and served as school librarian, was 70+ year member of the United Methodist Church, Worthy Matron of the Order of Eastern Star and other community groups. She especially enjoyed going to her boys’ school activities, trips with Lloyd, card parties with good friends, and the friendship of the United Methodist Women. Doris was preceded in death by her parents, husband Lloyd in 1989, siblings and two daughters-in-law, Darlene and Kay. She is survived by her sons Michael (wife Pam) of Elkhorn NE, William of Chino Valley AZ, and Rodney (wife Hang Loi) of Woodbury MN, seven grandchildren, thirteen great-grandchildren and many other family members. Visitation was held on Monday, July 23, 2018 at the Liewer Funeral Home in Wauneta. Funeral Services were held on Tuesday, July 24, 2018 at the Wauneta United Methodist Church with Pastor Melody Newman and Mr. Page Johnston officiating. Burial was in the family plot in the Riverside Cemetery. A memorial has been suggested in Doris’s memory Online condolences may be left at liewerfuneralhome.com LIEWER FUNERAL HOME OF WAUNETA ENTRUSTED WITH ARRANGEMENTS

The family of Doris L. Ough created this Life Tributes page to make it easy to share your memories.