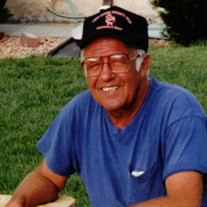 Donald Eugene Bernhardt was born January 9th, 1938, in Ault, Colorado, to John Bernhardt Jr. and Mollie (Mitchell) Bernhardt. Donnie (as he was known) grew up on a farm near Gill, Colorado, the youngest of four children, having two older sisters and one brother. As a youth he was active in 4-H, showing cattle, and sports, baseball being his favorite. Donnie attended school in Gill, graduating from Gill High School in 1956. On December 2nd, 1957, Donnie was united in marriage to Betty Joann Williams at St. Paul Congregational Church in Greeley, Colorado; to this union three children were born: Kerry, Kurt, and Darcy. Donnie and Joann farmed and made their home in the Gill area for many years. Donnie also assisted his brother, Johnnie, by driving trucks during sugar beet rehaul season, from the rural beet dumps to one of the many processing factories in the area. In 1969 the sugar beet crop froze in the ground before the beets could be harvested and was a total loss. After this, Donnie gained employment with Montfort of Colorado in their portion foods division, where he quickly rose to the position of supervisor. He was responsible for buying meat for the Montfort Company from other meat companies in the area to meet demand as well as selling the Montfort brand of meats to retailer and restaurants nationwide. During this time, Donnie, Joann, and their children still engaged in farming on a small farm where they lived, but Donnie wanted to get back into farming full time. In late December of 1975, Donnie quit is position at Montfort and in January of 1976, the family moved to Champion, Nebraska, where Donnie had rented land to farm in an area that had many opportunities for farming. He continued to farm with his sons until retiring in 2016. Donnie and Joann also had a trucking company, Triple B Commodities which they operated for several years. Donnie’s real passion was his love for polka music. With the help of a friend, Albert Holman, he learned to play the hammer dulcimer by sound. As luck would have it, Albert, needed a dulcimer player for a dance one evening and so Donnie became a part of the Albert Holman and the Polkatoons band starting in 1968. He continued playing with the band until moving to Nebraska. He thoroughly enjoyed his time with the band and a life lifelong friendship developed between Donnie, Albert, and Albert’s son, Dennis. Donnie’s greatest joys were his grandchildren. He truly enjoyed all of their activities in 4-H, FFA, school and athletics. Becoming a great-grandfather in 2020 was especially joyful for him. Donnie was a member of the Greely Colorado Moose Lodge, the Imperial Eagles, Farm Bureau, and the St. John Lutheran Church of Greeley, Colorado. He loved to fish, play pool, bowl, and talk to people where ever he went. HE WILL BE TRULY MISSED. Donnie passed away Sunday, October 10, 2021, at the Imperial Heights Assisted Living Center, Imperial, NE. Donnie was 83 years of age. Donnie was preceded in death his parents, brother and sister-in-law; Johnnie and Ruth Bernhardt. Sisters and brothers-in-law: Lillian and Pat Trocolla and Bernice and Red Bettger. In-laws; Philip and Pauline Williams. Brother-in-law; Kenny Williams, nephews; Terry Beasley, Mike Bernhardt, Jim Bettger, and Mark Ketchem. Niece; Rene Johnson. Survivors Include: Wife: Joann of Imperial, NE Son: Kerry Bernhardt of Champion, NE Son: Kurt Bernhardt and wife, Kristi, of Lamar, NE Daughter: Darcy Bernhardt and husband, Joe Mooney, of Ft. Myers, Fl. Grandchildren: Preston Bernhardt, Alexa Banks and husband, Jeff, Austin Bernhardt, and Ryan Bernhardt Great-Grandson: Cameron Banks Many nieces, nephews, and friends Funeral Services will be held, Thursday morning, October 14, 2021, 10:30 A.M. at Zion Lutheran Church, Imperial, with Pastor David Kahle officiating. Interment will follow at Mount Hope Cemetery, Imperial. Visitation will be held Wednesday afternoon, October 13, 2021, 2:00 P.M. -6:00P.M. at Liewer Funeral Home, Imperial, NE. A memorial, in Donnie’s memory, has been suggested to the Chase County Hospital Foundation, Imperial, NE. On line condolences may be left at liewerfuneralhome.com LIEWER FUNERAL HOME ENTRUSTED WITH ARRANGEMENTS

Donald Eugene Bernhardt was born January 9th, 1938, in Ault, Colorado, to John Bernhardt Jr. and Mollie (Mitchell) Bernhardt. Donnie (as he was known) grew up on a farm near Gill, Colorado, the youngest of four children, having two older sisters... View Obituary & Service Information

The family of Donnie E Bernhardt created this Life Tributes page to make it easy to share your memories.