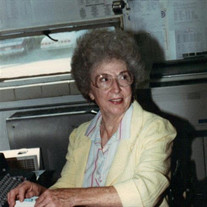 Carla Donnaline Kerns Kitt was born October 28, 1926 at her parent’s, Hugh and Maybelle Richardson Kerns, home in Benkelman, Nebraska. She began school in rural Wauneta, later attending and graduating from Wauneta Public School in 1943 . She continued her education at Colorado Women’s College for two years, then worked for an insurance company and department store in Denver. She was married to Dean Kitt in March 1947 at the United Methodist Church in Wauneta. They began their life together on the John and Sarah Kitt homestead site on the south divide. Donnaline worked alongside her husband on their farm. They milked cows and Donnaline kept a flock of laying hens. On Saturday nights they took their cream and eggs to town to sell. Donnaline planted a large garden and enjoyed the fresh produce throughout the growing season. She also raised fryers and remarked that her family required 3 and half chickens at dinner to feed her husband and five boys for a meal. Donnaline and Dean were blessed with five boys, Larry, Keith, Randy, Kirby and Michael. Donnaline took a great deal of pride in her boys and cheered their successes in school and sports and 4H. She was a staunch supporter of the Wauneta Broncos and attended every game possible that her boys played in and later enjoyed watching the games just for the fun of watching them. She was a Husker fan and was delighted when most of the football games were televised. When Nebraska’s volley ball team games were aired, she watched those, too. Donnaline’s parents lived in Casa Grande` Arizona. After harvest in 1956 and 1958, Dean and Donnaline packed up their family of then four boys, drove to Arizona and spent the winter with her parents. Dean secured a job in the area and Larry, Keith and Randy attended school there returning to their home on the south divide in the spring. Donnaline was a lifelong member of United Methodist Church. She was a one of the core members of the Mt. Zion Methodist Church on the south divide until its closure. She then moved her membership to the Wauneta United Methodist Church. In 1970, Donnaline applied for and was hired by the Wauneta Public School as the school secretary. She resigned in 1974 and was rehired in 1978. She retired from the school in 2003. She enjoyed the challenges of working with the administration and teachers but the students were the highlight of her tenure at the school. It was during her time at the school that the first computer was put into use. In order to keep ahead of the curve, Donnaline completed computer classes and developed a program for payroll and salary schedules for the school employees. Dean died in 1991. In 2005 after living on the south divide for 58 years she moved to an apartment at the Wauneta Housing Authority. Here, she was a bit closer to friends whom she enjoyed walking with in the morning and was soon asked to join a Skip Bo card club. She appreciated living in town and no longer having to battle the bad country roads after a rain or snow storm. As her health began to decline, she was very frustrated with the frailties of life and not being physically able to enjoy some activities that she liked. After falling in a parking lot, Donnaline moved to the Imperial Heights and then to the Manor. She then moved to Wauneta to Sunrise Heights where she resided until her death on November 27, 2016 at the age of 90 years. Donnaline was preceded in death by her parents, Hugh and Maybelle Kerns; her husband, Dean; two sons, Randy Kitt and Kirby Kitt; a grandson, Theron Kitt and her sister, Yvonne Hilderbrand. Survivors are three sons, Larry and his wife, Anita of Parks; Keith and companion, Dee, of Wauneta and Michael and his partner, Jerome Osborn, of Lincoln; seven grandchildren, seventeen great-grandchildren, daughter-in-law, Mary Kitt, and numerous nieces and nephews. Memorial services will be held Friday morning, December 2, 2016, 10:30 A.M. at the United Methodist Church of Wauneta with Pastor Elias Mukindia officiating. No visitation, Donnaline chose cremation. A private family inurnment will be held at a later date On line condolences may be sent to liewerfuuneralhome.com LIEWER FUNERAL HOME OF WAUNETA IN CHARGE OF ARRANGEMENTS

The family of Donnaline Kitt created this Life Tributes page to make it easy to share your memories.