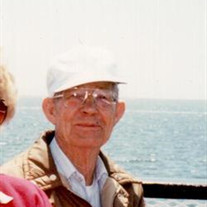 Donald George Osborn was born to Orian M. and Agnes E. (Sahlin) Osborn in rural Dundy County on November 4, 1916. He entered eternal life on February 24, 2014. He lived through many changes in his lifetime. Although in later years, he lost his sight, he remained positive and always enjoyed visiting with friends and family and doing chores as if he had his sight. Don was a faithful member of the Lutheran Church and attended church regularly until health did not permit. He had a strong faith in God and lived his life accordingly. Don spent his boyhood on the farm with family, working and playing with the family of his youth. As a young man, he worked in the Sandhills with the Huffman Family for years. Don was a cowboy at heart and enjoyed the days on the ranch before entering the Army in October of 1941 to serve and protect our freedom. He served in the Armed Forces for five years and was discharged in 1945. Don married Loraine Lutz on March 2, 1947 in St. Francis, Kansas. The spent their lives together for 65 years, caring for and loving their families. Don returned to the Dundy County area where he farmed until retirement. He was a strong man with a kind heart and gentle hands. He held and loved many nieces and nephews who were so close to his big heart. Don was always ready to lend a helping hand to a neighbor or a friend with a smile. We will remember his loving ways and keep them close to our hearts as the days pass. Preceding him in death were his parents Orian and Agnes Osborn, his wife Loraine in 2012, an infant daughter, sisters: Fay, Elsie, and Viola; and brothers: Bill, Dale, and Landy. Survivors Include: Sister: Ilene Erdman and Husband Earl, of Haigler, NE Brother and Sister-In-Law: Carl and Jean Lutz of Parks, NE Sisters-In-Law: Naomi Osborn of Benkelman, NE. Phyllis Osborn of Chadron, NE. Helen Stevens of Brush, CO. Many nieces and nephews who will sadly miss “Uncle Don” and hold him near to their hearts. Funeral Services will be held Friday, February 28th, 2014, 2:00 P.M. at Zion Lutheran Church, Benkelman, with Pastor George Matthews officiating. Interment will follow at the Benkelman Cemetery. Visitation will be held starting at 11:00 A.M., Friday morning, February 28th, 2014, at the church. A memorial has been established in Donald’s memory. Online condolences can be left at liewerfuneralhome.com BENKELMAN MEMORIAL CHAPEL IN CHARGE OF ARRANGEMENTS

Donald George Osborn was born to Orian M. and Agnes E. (Sahlin) Osborn in rural Dundy County on November 4, 1916. He entered eternal life on February 24, 2014. He lived through many changes in his lifetime. Although in later years, he lost... View Obituary & Service Information

The family of Donald Osborn created this Life Tributes page to make it easy to share your memories.