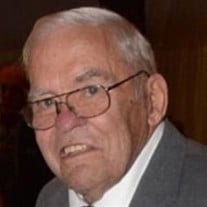 DONALD HEWITT Donald Dewayne Hewitt, of Holyoke, Colo., was born on September 27, 1934, in a sod house near Culbertson, Nebr. to Clarence and Anna ( Cunningham) Hewitt. He passed away April 4, 2019 at Haxtun Hospital District, in Haxtun, Colo. Don grew up with eight siblings, and in a time when hard work was expected and love of the Lord, country and family was a must. At the early age of 17, he chose to serve his country by joining the US Army during the Korean Conflict. He served with the 82nd Airborne as a paratrooper and attained the rank of Sergeant First Class. Four of his brothers also served in the US Army. He acquired his GED and received an Associates of Education at NJC. On July 17, 1980 he married Janice (Buffington) Heldenbrand and a blended family of two loving parents of seven teenagers began. Throughout his life, all of his work jobs were service oriented. His first job in Holyoke was managing the bowling alley when it first opened. Then he worked at Red’s Conoco, Holyoke Coop and retired from managing the Amherst Co-op Oil station after 21 years of serving others. During this time he also farmed. After retirement he became a handyman and enjoyed painting houses. Donald chose to worship his Lord and Savior at Zion Lutheran Church. He served in many capacities, as Elder, Sunday School teacher, head usher and many other board positions. In community service, Don served on the Board of Phillips County Telephone Company, was a Boy Scout Leader, and had been a member of the Jaycees, Lions Club, Holyoke Gun Club, Venango American Legion, and Amherst Volunteers Fire Department. His interest and passions included Holyoke Dragon sports, Husker football, golfing, bowling, and wood working, but was most passionate of family gatherings. Donald loved family, and as the head of his own large family, he wore many hats, such as: father, adoptive father, foster father, step father, father-in-law, grandfather, great grandfather, great great grandfather, uncle and loving husband. “A good Dad makes your day. A great Dad makes your whole life.” Preceding him in death were his parents, brothers Boyd, Harold, Stanley, Gary and Eugene Hewitt, sister, Sharon Buffington, and brother-in-law Keith Buffington. Those who celebrate his life include, wife Jan; daughter Tina Kramer and husband Garry of Holyoke; son Neil Hewitt and wife Jennifer of Dallas, Texas; son Bob Heldenbrand and wife Brenda of Holyoke; daughter Joene Crocker and husband Steve of Kearney, Nebr.; daughter Roene Fox and husband Michael of Kearney, Nebr.; son Tod Heldenbrand and wife Robi of Alliance, Nebr.; son Rob Heldenbrand and wife Jaci of Omaha, Nebr. and friends who are loved as family, Blaine and Kay Schmidt of Holyoke. Twenty-six grandchildren, fourteen great grandchildren, and two great great grandchildren. Brothers Fred Hewitt of North Platte, Nebr.; Nelden Hewitt of Kent, Wash.; brother-in-law Kent Buffington of Wauneta, Nebr.; sisters-in-law Sylvia Buffington of Lincoln, Nebr.; Charlotte Hewitt of McCook, Nebr.; Darlene Hewitt of Sterling; many nieces and nephews, and a host of friends. Funeral services for Don Hewitt will be held Tuesday morning, April 9th, 2019, 10:00 A.M. at the Zion Lutheran Church of Holyoke, CO., with Pastor Gary Rahe officiating. Interment will follow Tuesday afternoon, 3:00P.M. at the Riverside Cemetery, of Wauneta, NE, with full military honors. Visitation will be held Monday afternoon, April 8th, 2019, 2:00 P.M. – 6:00 P.M. at the Zion Lutheran Church of Holyoke, CO. A memorial has been suggested to the Hewitt family for future designation. Online condolences may be left at liewerfuneralhome.com LIEWER FUNERAL HOME ENTRUSTED WITH ARRANGEMENTS

DONALD HEWITT Donald Dewayne Hewitt, of Holyoke, Colo., was born on September 27, 1934, in a sod house near Culbertson, Nebr. to Clarence and Anna ( Cunningham) Hewitt. He passed away April 4, 2019 at Haxtun Hospital District, in Haxtun, Colo.... View Obituary & Service Information

The family of Donald Hewitt created this Life Tributes page to make it easy to share your memories.