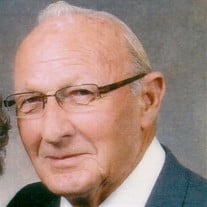 Donald LeRoy Majors was born on August 5, 1928 in Imperial, Chase County, Nebraska at the home of his parents, William Harrison Majors and Cora Etta Dukes, joining the family as the 5th addition to the total of 6 children that they would raise. Don was given 88 years, seven months and 19 days of blessings in his worldly life until being called to his heavenly Home the evening of March 24, 2017 at the Chase County Hospital in Imperial, NE. Attending Imperial Grade School, Don graduated from 8th grade to Chase County High School where he studied until mid-term of his sophomore year when the family moved to Wauneta, NE. He continued his education at Wauneta High School graduating in the class of 1946 before attending Doane College in Crete for an additional year. It was during his years at Wauneta High School that Don met Bonnie Jean Crosson who would be the love of his life. Despite Bonnie Jean saying, “No,” the first time that Don asked her for a date to the prom, he was persistent and following the dance that evening Don walked with Bonnie to her home. They have enjoyed each other’s companionship - holding hands and each other, dancing to swing, polka, and waltz’s ever since. Following the 1947 Christmas Eve church service at rural St. Paul Lutheran church Don showed Bonnie a ring box and popped the question. They celebrated by dancing the night away in Imperial. Bonnie Jean attended beautician college in Hastings while Don was in college at Doane. They were united in marriage on February 19, 1949 by Rev. David Kreitzer at Zion Lutheran church in Hastings. This union was blessed with three children, James Michael born October 25th 1949, Deborah Jean born December 9th 1950, and Paula Rene' born August 14th 1960. James and Deborah were delivered in Imperial while Paula arrived when the family resided in Sidney, NE. Don began working early in life starting at JC Penney’s in Imperial and Stinnette Grocery in Wauneta. He also contributed his efforts to the construction of Enders Dam with the Department of Reclamation while in high school. Familiar with and devoted to farming, ranching and food all of his life, Don worked on the Crosson Farm/Ranch south of Wauneta, D&S Market in McCook, NE, and then Krotters River Ranch south of Imperial. In 1957 Don and Bonnie moved to Sidney, NE where he worked as the manager at Town & Country Market. Upon the family’s return to Wauneta in 1962 Don was first employed as the manager at the COOP grocery before returning to a life of farming and ranching on the Crosson homestead. In 1966 the family moved the short distance to Imperial where Don worked as assistant manager first at Jack & Jill and then later at Dwight Huff’s Superfoods until 1981 where he “retired” before farming and ranching again in Wauneta. Baptized and confirmed at Peace Lutheran church in McCook, NE on Dec 16th, 1951, Don held congregational membership at St Paul Lutheran, Sidney, Redeemer Lutheran, Wauneta, and Zion Lutheran in Imperial. Don always enjoyed dancing and having fun with Bonnie Jean and numerous friends. He also was an avid reader, sportsman and household "fix it" man improving and remodeling many of the houses the family called home. He loved the outdoors and took in water skiing, hunting and boating at every opportunity as well as numerous family trips to our nation’s national parks. Later in life one of his greatest joys was spending time with his grandchildren and their families and being able to know his great grandchildren. Don was preceded in death by parents William H and Etta Majors and all siblings including sisters Elmira Majors Fielder and husband Orville "Slim", Viona Majors Ahrens Piva and husband Alfred "Al", brothers William "Bill" Majors, Keith Majors and wife Yvonne "hot dog", James "Jim" Majors, niece Joan Fielder, great nephew Eric Ahrens, and great niece Brittney Elizabeth Majors. Rejoicing in Don's salvation are his wife Bonnie Jean, son Mick and wife Joyce, daughter Debbie and husband Jim Kunkel, daughter Paula and Jay Linke. Pallbearers were Don's 7 Grandchildren, Brain, Clay and Clint Majors, Leigh and Tracy Clapp, Jason and Kelsey Kunkel, Jessica and Michael Buecker, Harley Allen. Honorary pallbearers were Don's 7 great grandchildren Maycee and Cannon Clapp, Kendra and Joshua Kunkel, Jaxson and Brock Buecker, Colt Majors. Sister-in-law Ibbie Ann Majors ,Joann Majors, nephews and nieces, Charles "Chuck" Ahrens and wife Diane. Billy and Joyce Majors, Bob and Colleen Majors, Bruce and Deb Majors, Jimmy Majors, Nancy Crocket, Susie Majors, Mark and Julie Majors. Many great nieces and nephews, distant cousins, and countless friends that he always shared a smile and joke with. Funeral Services for Don Majors will be held Thursday morning, March 30th, 2017, 10:30 A.M. at the Zion Lutheran Church of Imperial, with Pastor David Kahle officiating. Interment will follow at Mount Hope Cemetery, Imperial. Visitation will be held Wednesday afternoon, March 29th, 2017, 2:00 P.M. – 6:00 P.M. at the funeral home in Wauneta. A memorial has been established in Don’s memory. Online condolences may be left at liewerfuneralhome.com LIEWER FUNERAL HOME ENTRUSTED WITH ARRANGEMENTS

Donald LeRoy Majors was born on August 5, 1928 in Imperial, Chase County, Nebraska at the home of his parents, William Harrison Majors and Cora Etta Dukes, joining the family as the 5th addition to the total of 6 children that they would raise.... View Obituary & Service Information

The family of Donald "Don" Majors created this Life Tributes page to make it easy to share your memories.