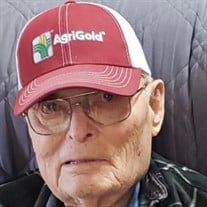 Don Emanuel Bauerle was the youngest of four children born to Emanuel and Laura (Yaw) Bauerle. He was born on September 28, 1928 in rural Champion, Nebraska. The basement of his family home was dug on the day Don was born and he lived in this same house his whole life, except during his military service. Don Peacefully passed away at home, with his wife and children surrounding him, on Thursday, February 11, 2021. When Don was a boy, he worked alongside his dad on the family farm, growing mostly dryland corn. When not working, Don enjoyed fishing and hunting. In high school, Don was athletic and competitive in sports. He did especially well in football, boxing, and track. Don was being considered as a UNL football recruit when he had an injury during the last football game during his senior year of high school. This event, along with the military draft, changed Don’s plans. Don was drafted into the Army in 1950. He was taken by train to Fort Riley, Kansas for two weeks to be trained as a paratrooper. But after a knee injury, he was sent to Camp Carson, Colorado Springs. From there he was sent to the Rocky Mountain Arsenal, where he was assigned to the 216th Chemical Corp. From Denver, Don was sent to Mercury Nevada (also known as Area 51) where he was trained in chemical, biological, and nuclear warfare. He took part in “Operation Tumbler Snapper” and “Buster Jangle” which were the testing of atomic bombs at the Nevada Proving Grounds. Don was involved with the detonation of five atomic bombs and was exposed three times to radiation that was deemed “over-exposure”. Don later told his children about the shock waves from the bombs exploding, and seeing what looked like large dirt storms rolling along the desert and spanning miles up into the sky. Don remembered seeing what would become the “Stealth Bomber” and the “U2 Spy Plane” in the very early stages of development. Don was honorably discharged in 1952 and returned to the Bauerle family farm in Champion, Nebraska. Once back home, he joined a men’s barbershop quartet, singing tenor with his brother, Irvin, his brother-in-law, LeRoy Fuehrer, and cousin, Eldon Bauerle. He married Burnetta (Bea) Silvester on May 15, 1954. Don and Bea settled into farm life and raised five children: David, Debra, Dirk, Dorothea, and Darice. Farming was a family endeavor for the Bauerles. The children were raised with a strong work ethic and solid Christian faith. Don and Bea raised their children in the EUB church, which later merged with the United Methodist Church. After the children were all raised, Don and Bea joined Crossroads Wesleyan Church in Imperial and were faithful attenders for several years. They enjoyed sitting at a reserved corner table in the sanctuary. The Bauerle family learned to work hard, but also played hard. They went fishing, swimming, and camping in the summer when it rained and the irrigation wells could be turned off. In the winter, they went ice fishing and sledding. Don’s children fondly remember their dad pulling them behind the tractor in an upside-down old car hood. Don’s sons, David and Dirk, returned after college to farm alongside their dad. Even after he was “retired”, Don would assist with planting and harvest for many years. Don was known as quite a fisherman, both in his abilities and his telling of “fish stories”. He enjoyed going on fishing trips to North Dakota and Canada with his fishing buddy, Fred Bessler. Don enjoyed watching his grandkids grow up and would attend their events whenever possible. He would also often call the ones who lived father away to get updates on their activities. He was especially pleased to have his first great grandson, Graham Bauerle, and his first great granddaughter, Brynn Bauerle, join the family. Preceding in death were Don’s parents, Emanuel and Laura; step-mother, Leta Bauerle, sisters, Vera Kleven and Alta Fuehrer; brother-in-laws, Walter Kleven and LeRoy Fuehrer. Surviving to remember and celebrate his life, are Don’s wife, Burnetta (Bea) Bauerle of Champion, NE; children, David and Jayne Bauerle of Champion, Debra Bauerle of Imperial, NE; Dirk Bauerle and Dawn Weber of Imperial; Dorothea (Bauerle) Quiring of Henderson, NE; and Darcie (Bauerle) and Greg Cecil of Lincoln, NE. Grandchildren, Adam and Linsey Bauerle of Rapid City, SD; Jamilah (Bauerle) and Nelson Rosas of Champion; Alisa Bauerle of Champion; Daniel Quiring of Chapman, KS; Lydia Quiring of Schuyler, NE; Alia Cecil of Ohama, NE; and Jonah Cecil of Lincoln, NE; great grandchildren, Graham and Brynn Bauerle of Rapid City, SD; brother and sister-in-law, Irvin and Garneta Bauerle of Champion; numerous nieces and nephews, and cousins. Immediate Private Family Memorial Services will be held Saturday morning, February 20, 20211, 10:30 A.M. (MT) at the Crossroads Wesleyan Church, Imperial, NE, with Pastor Alex Gilbert officiating. A Public Graveside Service will be held Saturday morning, May 15, 2021, 9:30 A.M. (MT) at Mount Hope Cemetery, Imperial, NE, with full military honors. Pastor Alex Gilbert officiating. A memorial has been suggested to the Crossroads Wesleyan Church of Imperial, NE On line condolences may be left at Liewer Funeral Home.com

Don Emanuel Bauerle was the youngest of four children born to Emanuel and Laura (Yaw) Bauerle. He was born on September 28, 1928 in rural Champion, Nebraska. The basement of his family home was dug on the day Don was born and he lived in this... View Obituary & Service Information

The family of Don E Bauerle created this Life Tributes page to make it easy to share your memories.

Don Emanuel Bauerle was the youngest of four children born to...