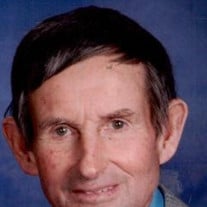 Dennis Gilbert Spady was born April 7, 1936, at his Grandmother Kelly’s home in Imperial, Neb., to Clarence (Bruz) and Nelda (Kelly) Spady. He grew up on a farm west of Imperial and attended a rural school through eighth grade. He graduated from Chase County High School in 1953. After graduation Dennis worked in Kansas City, Mo., at the Buick, Pontiac, Oldsmobile plant during the day and attended college classes at night studying architecture. He then worked for a cabinet maker and a custom home builder. On Sept. 21, 1958, Dennis married Celia Joyce Karns, his high school sweetheart, at the Methodist Church in Imperial. Their first two years of marriage were spent in Kansas City. Dennis enlisted in the Kansas National Guard with Basic Training at Fort Leonard Wood, Mo. Later he was stationed in Fort Ord, Calif., for six months of active duty. He was in the engineering division and built bridges. In 1960, the couple and new daughter Cynthia returned to Imperial so Dennis could help with the family construction business. Dennis worked with his grandfather George, father Bruz and uncle Kenny, all mentors of his carpentry skills. Shortly after their son Mark was born in 1962, Dennis and Celia purchased a home in Champion, Neb., by the Champion Lake and Mill, where they would raise their family. Son Blaine joined the family in 1969. The house was remodeled several times and continued to be “home” for the rest of his life. Dennis built numerous homes in the Imperial area over the years while working in the family company, Spady Construction. This tradition continues through his son Mark and grandson Alec, and other family in the years to come. Dennis generously gave back to his community through volunteering his time to many projects. He served on the Champion School Board for several years and more recently took a seat on the Chase County Champion Mill Board. It was also common to find him helping those in need of carpentry skills after regular working hours. Dennis’ love for God was evident through his various contributions to the current First United Methodist Church in Imperial. Dennis helped design and was a co-chair of the building committee for the church. Dennis, his brother, sons and nephews framed the church along with help from several volunteer church members. He also gave his time and talents to the sound system of the new church. He served on the church’s Finance Committee and as Stewardship Chair for several years. He received his 50-year membership pin in 2013. Dennis and Celia sponsored several youth mission trips. Later they traveled to Mexico on five different United Methodist Mission teams. Dennis was a loving and patient father and teacher. He took time to teach not only his children and grandchildren but also their friends how to snow and water ski. Fishing, camping and spending time at the cabin were also favorite activities. He and Celia also enjoyed vacationing. They traveled from Alaska to the Caribbean to the Holy land and many places in between. Dennis enjoyed good health most of his life. He worked as long as he was able until a few years ago when health problems brought about his retirement. Dennis’ philosophy on life was to serve. He served his church, his community, his family and his Lord. Dennis passed away Wednesday morning, Sept. 3, 2014, at the University of Nebraska Medical Center in Omaha, Neb. He was 78 years of age. He was preceded in death by his parents, grandson Austin Spady, sister-in-law Elva Spady and sister Doris Baldwin. He is survived by wife, Celia; children Cynthia Dahlkoetter and husband Dennis of Grant, Neb.; Mark Spady and wife Michelle of Imperial; Blaine Spady and wife Robin of Lincoln, Neb.; grandchildren Leah Dahlkoetter of Grand Island, Neb., Danielle Dahlkoetter of Sioux City, Iowa, Alec, Paige, Nolan, Sophie, Lucy, Olivia and Quinn Spady of Imperial, Eleanor Spady of Lincoln; brothers Darwin Spady of Lincoln, Deloyce (Pete) Spady and wife Becky of Imperial; father-in-law Kermit Karns of Imperial; brothers-in-law Ray Baldwin of Hudson, Colo., Dick Karns and wife Loretta of Kearney, Mo., John Karns of Liberty, Mo.; uncle Kenneth Spady of Ogallala, Neb., along with a host of other family and friends. And the joy continues with a new grandchild expected in November! Services were held on Sept. 8 at the First United Methodist Church with Pastor Valera Heydenberk and Rev. Robert Call officiating. Interment was at Mount Hope Cemetery in Imperial. Pianist was Marcia Bauerle. Paige Spady, Emma Bauerle and Sophie Spady sang “Amazing Grace, My Chains Are Gone”. Casketbearers were Mike Baldwin, Doug Baldwin, Eric Spady, Jason Spady, Trent Spady and Scott Spady. Honorary Casketbearers were Stan Davison, Seth Fitzpatrick, Don Welch, J.D. Kelly, Robert Farrer, Burton Beard, Garry Spady, Ray Baldwin, Byron Hust, Darrell Kilpatrick and Myron Gardner. Memorials have been established to the Scleroderma Foundation www.scleroderma.org, First United Methodist Church of Imperial and the Champion Community Center, Champion. Liewer Funeral Home was in charge of arrangements.

Dennis Gilbert Spady was born April 7, 1936, at his Grandmother Kelly&#8217;s home in Imperial, Neb., to Clarence (Bruz) and Nelda (Kelly) Spady. He grew up on a farm west of Imperial and attended a rural school through eighth grade. He graduated... View Obituary & Service Information

The family of Dennis Spady created this Life Tributes page to make it easy to share your memories.