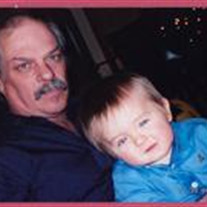 Dennis Way Dennis Jay Way, son of Elmer Dean and Dorene Kathryn (Gooseman) Way, was born on November 4, 1955 in David City, Nebraska. He attended school at Champion Grade School and Chase County High School. On December 14, 1974, Dennis was united in marriage to Julie Ann Frosh in Imperial, NE. To this union, he was blessed with 2 children, Shawnna and Kevin. Over the years, some of his employers were Imperial Ford New Holland, Schrotberger Trucking, Gary Sporhase Trucking, Midnight Express, and Stromberger Farms. Other business adventures are Way/Nichols Feed Store, and owner/operator of other trucks. Dennis's love for trucks led to his profession as an owner/operator of Way Trucking. He loved working on trucks, working on go karts for his grandkids, camping, fishing, and apparently a little bit of drawing these last few months. In October 2011, Dennis and Kevin bought a 1990 Peterbuilt cab-over. Due to his health, he didn't get to drive the truck he always wanted for very long, but he gave it his best. On December 21, 2012, Dennis passed away while in his sleep after being diagnosed a short time ago with renal (kidney) failure. He was 57 years of age. Survivors include: Mother, Dorene Way of LaPorte, CO Daughter Shawnna and Shawn Bigham of Imperial Son Kevin Way and Shanda of Lamar Brothers: Ron and wife Rose Way of LaPorte, CO Steve and wife Terry Way of Brush, CO Dan and wife Pamela Way of Payson AZ Bruce and Wife Dianne Way of Imperial Randy Way and Melissa of Elsie Sister: Diane and husband Louie Herrick of North Platte Dennis has 5 grandchildren: Shalee, Shelby, Shalissa Bigham, and Shianne and Koby Way, amongst numerous nieces, nephews, and more close friends than he realized. He was preceded in death by his father Elmer, a sister Patricia, and his brother Mike. Funeral Services for Dennis Way will be held Wednesday morning, December 26, 2012, 10:30 a.m. at Zion Lutheran Church of, Imperial, with Rev. David Kahle officiating. Interment will follow at Mount Hope Cemetery, Imperial, NE Visitation will be held Monday December 24, 2012, 1-3p.m. at the funeral home in Imperial. A memorial has been established in Dennis’ memory Online condolences can be left at liewerfuneralhome.com LIEWER FUNERAL IN CHARGE OF ARRANGEMENTS

The family of Dennis Jay Way created this Life Tributes page to make it easy to share your memories.